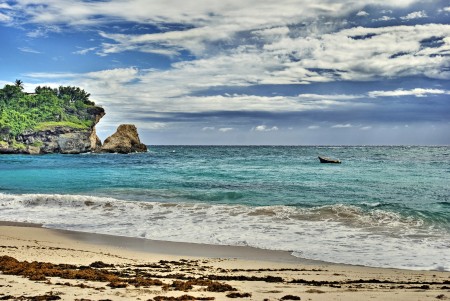 On Thursday, a magnitude-6.4 earthquake struck an area in the ocean near Barbados, and was also felt throughout the Caribbean region. There are no reports yet of injuries to residents or damage to buildings or other property.

According to the U.S. Geological Survey (USGS), the earthquake’s epicenter was tracked to 81 miles northeast of Bridgetown, the capital city of Barbados, at a very shallow depth of just three miles. The USGS recorded the quake at 11:16 a.m. local time. Kerry Hinds, the acting director of the Department of Emergency Services in Barbados, stated, “With earthquakes, there is the possibility of aftershocks so please be mindful of that.”

Residents in the area that were worrisome over further ground shaking were met with a magnitude-5.3 and magnitude-5.2 earthquake just after the first one hit. The latter quake hit at 11:36 a.m., according to the USGS.

Pedro Barker, a resident of the island of Barbados said he is concerned about the origin of the quakes, “because there were two tremors in such a short space of time.” He also told reporters he was rendered dizzy as the ground began to move under him this morning.
By Alex Lemieux