In 2011, the U.S. Women’s World Cup 2015 team lost to Japan, but now, four years later, they have redeemed themselves by beating Japan 5-2 on Sunday, July 5. Midfielder and Captain Carli Lloyd was on a mission and did not give the Japanese a chance to play their natural game, and there was nothing, or no one, who could stop her.

Lloyd, who scored three goals for the U.S. Women’s World Cup 2015 team, made the first hat trick of the Women’s World Cup final. Wearing her No. 10 jersey, she was all over the field in her fight for the win. She did not give Japan a chance and guided the American team to a third Women’s World Cup victory. The Americans have not won the Women’s World Cup in 16 years, and that is why Sunday’s victory was even sweeter for the country and the players. Lloyd was proud of what her team was able to accomplish, but the initial shock of making history made it hard for her to feel the excitement completely.

She was definitely the star of the game after scoring the hat trick. Her first goal occurred in the first three minutes of the game, she scored again two minutes after that and made her third goal 11 minutes later. The third goal occurred when Lloyd received a pass at mid-field and skillfully evaded a defender, which gave her a clear path to the goal. At this point, she decided to go for it and let it fly, stunned Japan the most. It was a 55-yard shot that should have been impossible, but it was the shot that gave the U.S. Women’s World Cup 2015 team the game. After her third goal, there was over an hour left of regulation time, and over 54,000 mostly-U.S. fans began celeb 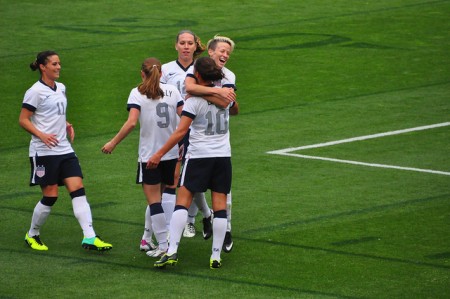 rating as if the game was over. Even though Japan hung in there, it was pretty much over. Lauren Holiday, along with Tobin Heath, also made goals, putting a cap on the U.S. victory.

The U.S. Women’s World Cup 2015 team waited four years for redemption, and they were determined to prove themselves this time around. In the 2012 London Olympics, the U.S. tasted some revenge when they beat Japan for the gold medal. With just 27 minutes played, Japan’s Yuki Ogimi scored their first goal, and 25 minutes later, defender Julie Johnson made a challenge for the ball, which hit off the top of her head and went into the U.S. net, making it two games in a row in which Japan received a point due to a mistake by their opponent. Orgimi’s goal ended a 540-minute U.S. streak of not allowing a goal – a streak which is now tied with Germany’s 2007 streak.

U.S. goalkeeper Hope Solo, who was voted the best in her position, made three saves, which was one more than Japan’s goalkeeper, Ayumi Kaihori. Lloyd was awarded the Golden Ball trophy for best player. The U.S. Women’s World Cup 2015 team came into the final game ready to counter whatever Japan would dish out. Lloyd had visualized making four goals in the tournament, and she did come within one goal of that dream, but, more importantly, she was able to lead her team to making the greatest dream they could have had, come true.

For four years, the U.S. Women’s World Cup 2015 team have waited for this redemption, and they were able to make history by getting it. Morning news anchors started their broadcasts with the tournament results continuing the celebration all over the country. After the awards were presented and the press asked questions, it was time for the U.S. team to celebrate the victory they had earned.

U.S. Women’s World Cup 2015 Team Gets Redemption After 4 Years added by Katherine on July 6, 2015
View all posts by Katherine →