California Burns as a Dry and Thirsty Land [Video]

By Cherese Jackson on September 14, 20155 Comments 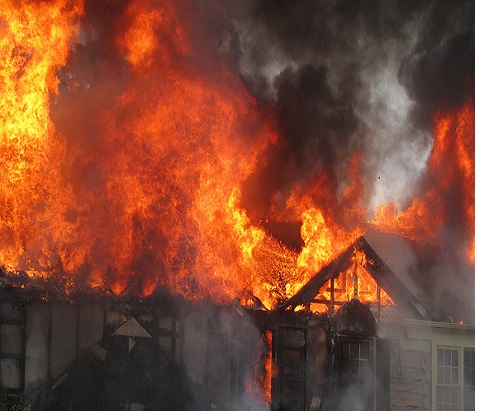 California continues as a dry and thirsty land in need of water. In less than two days, the devastating wildfire in the Western U.S. state, which stretches from the Mexican border along the Pacific has destroyed more than 400 homes and businesses. At least one person has died, four firefighters hospitalized and over 10,000 people have been forced to flee in order to escape the raging flames. One official has called this the worst tragedy Lake County has ever seen.

The Valley Fire, which by Sunday had scorched about 80 square miles — 50,000 acres — north of San Francisco and burned up to 1,000 structures, including barns, sheds, and entire neighborhoods. The blaze broke out on Saturday, quickly spread and continues to expand in several different directions. It was declared zero percent contained as a wicked wall of flames turns a town to rubble.

The force of the flames left many with only minutes to escape its fury. The heat, flames and explosion were so intense it caused firefighters to retreat because there “was nothing they could do” to contain or control the outbreak. California is in the middle of a firestorm with more than 13 wildfires raging across the state. This dry and thirsty land which is caught in an epic fire season has now been declared to be in a state of emergency as the National Guard comes in to assist.

California is in its fourth year of the historic drought, creating dry conditions that make large parts of the state more susceptible to wildfires. Recent high temperatures have been named as the instigator of the blaze due to the heat wave which has covered much of the golden state, according to the National Weather Service. Reportedly, this week’s weather is expected to provide some assistance to the crews working to diligently to harness a state in chaos.

The dry and thirsty state has not seen any rain or humidity in an extended period of time causing a massive drought of dehydrated land. California is expected to receive a stream of moisture emanating from the Pacific Ocean along with a series of cold fronts to increase humidity and produce showers today and tomorrow causing temperatures to fall from the high 90s to the low 80s and even 70s. All of these factors will help with the fight against this fire, but it does not eliminate the reality that the ground is still very dry.

Although other fires during the summer have also spread quickly, this blaze soared through several rural communities which had no defense against the fire’s size and speed. California has been a dry and thirsty land for much too long causing officials to worry all summer about the probability of this type of outbreak due to the severe drought conditions the state has experienced. The Valley fire, according to experts, moved faster than any other in the recent history of California scorching 40,000 acres in less than 12 hours. Climate scientist at Stanford University, Daniel Swain said:

There are not very many fires in California’s history that have done that. I do not know if there really is a precedent for it. This fire sort of broke the rules even relative to this incredible season that has already occurred.

The Valley fire continues to expand reaching 61,000 acres. At least one person was killed, four firefighters were hospitalized and over 10,000 people have been forced to evacuate in order to escape the raging flames. As California continues as a dry and thirsty state, this firestorm has been hailed the worst tragedy Lake County has ever seen.