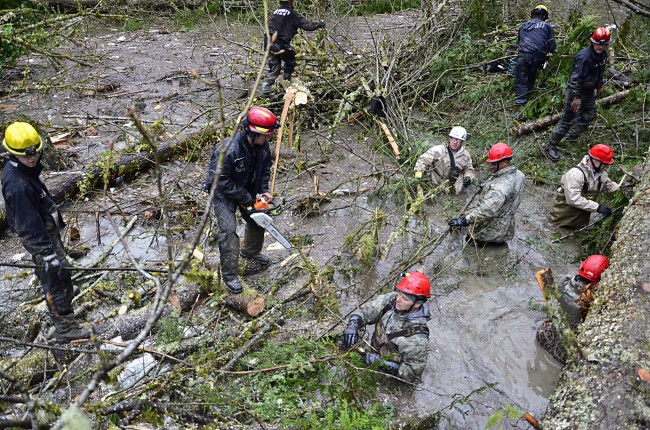 Several hundred people are still missing in Santa Catarina Pinula, Guatemala, after a landslide enveloped the entire village. Rescuers have been desperately searching for the missing. Presently, 56 people are confirmed dead. The incident commander for Guatemala’s disaster reduction office, Sergio Cabanas, confirmed the new death tally Saturday, Oct. 3, 2015. He reported to the AFP news agency that the mudslide had left 3,000 people homeless.

It has been 36 hours since the heavy rains caused the mudslide, and as time ticks by, the death toll continues to rise. Search and rescue efforts are carrying forward their quest to find survivors as they continue to shovel through the debris.

On Oct. 1, mud and debris ripped through El Cambray II, a small village of Santa Catarina Pinula, Guatemala. The mudslide damaged or destroyed 125 homes that stood in its wake.

On the morning of Oct.3, police, rescue crews, soldiers, and volunteers began a second day of digging through mud and debris. Two firefighters were injured when a wall collapsed as they were attempting to remove a body from the wreckage.

A temporary morgue has been set up near the homes that were buried in the mudslide. According to local news reports, relatives have been regularly making inquiries regarding the discovery of missing loved ones.

The area on the ground is beset with devastation on all sides. Even the skies overhead appear filled with vultures hunting for dead caucuses.

Villager Carlos Hernandez said, “We can’t live here anymore.” Then he walked away carrying the few belongings he could salvage. A teenager who had left home to run an errand for his mother, returned to nothing, he told AFP. His mother and seven siblings were among the missing.

Alex Lopez telephoned his ex-wife and children when he heard about the landslide, but his calls went unanswered. The bodies of his daughters, ages 21 and 22, and his two-year-old grandson, have been found. He awaits word about his ex-wife.

Authorities say there are 600 people still missing. However, 34 people have been rescued from the rubble alive, and 25 others were found injured.

Families report that they have received text messages from loved ones who are still trapped.

Among the 56 people found dead, at least three were children.

On several occasions, authorities warned villagers to evacuate the area; now, they are homeless.

Stay with Liberty Voice for more information as soon as it is available.