By Shepherd Mutsvara on October 30, 20152 Comments 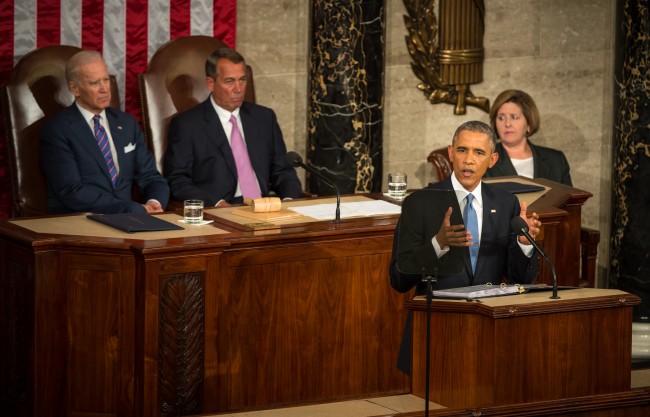 President Barack Obama authorized the deployment of special troops to Syria on Oct. 30, 2015, to act as advisors to local ground troops as a way to fight against the Islamic State. According to officials, the “small” deployment, involving “fewer than 50” Special Operations Forces, will be sent to the region so as to invigorate the campaign against the terrorist group in the northern part of Syria.

Josh Earnest, White House press secretary told reporters, “This is an intensification of a strategy that the president announced a year ago.” Earnest also acknowledged Syria as a “dangerous place on the globe” and was cagey with the actual number of forces that will be deployed. He said the actual number will not be revealed at the present moment as this might jeopardize the mission, which does not have an open-ended time frame.

The American troops are expected to be deployed “as soon as possible” and will play an advisory role to Syrian Arab and Kurdish forces in Raqqa, Syria. It is not clear whether the Special Forces will be involved in ground combat or not. This uncertainty has been aired by some Republicans in Congress, who feel that the Obama-led administration has kept delving into war in the Middle East. Senator John McCain, a Republican representative for Arizona, has added his voice of dissent to the deployment saying, “This is yet another insufficient step in the Obama Administration’s policy of gradual escalation.”

Fox News reports that there is also a possibility of new deployment of expert personnel to Iraqi and Turkey. It is reported that Washington will be sending aircraft, including F-15s and A-10s, to Turkey. The U.S. has an air base in Incirlik, Turkey and it is believed the heavy armor will be used to support ground troops in the fight against the Islamic State in both Turkey and Syria. This is in the wake of recent terror attacks in that country, which were led by the Islamic State. A close source to the White House has also revealed that Obama consulted several stakeholders before authorizing the deployment of the Special Forces to Syria.

Ash Carter, the U.S. defense secretary, also hinted that the U.S. was reworking its strategy in Syria with regards to aerial and unilateral ground attacks. Carter is of the view that Russia’s presence in the war-torn Syria has also negatively affected America’s role in fighting the Islamic State. He also stated that Obama’s decision to authorize the deployment of special troops in Syria should be seen as strong indications by the White House to root out terrorism in the Middle East.  However, the defense secretary could not reveal the exact date the Special Forces would arrive in Syria, citing security reasons that may affect the mission if all details are divulged.

Carter believes that Russia’s intervention has escalated the conflict and created fertile grounds for operational confusion. Russian President Vladimir Putin has recently authorized aerial bombings of Islamic State targets in Syria, which have resulted in the death of innocent civilians. It is believed the decision by the White House to send Special Forces into the war zone is meant to counter not only the caliphate but also Russia’s veiled assistance to Syrian President Bashar al-Assad. The video below shows the announcement by the White House press secretary on the decision by President Obama, who authorized the deployment of special troops to Syria.