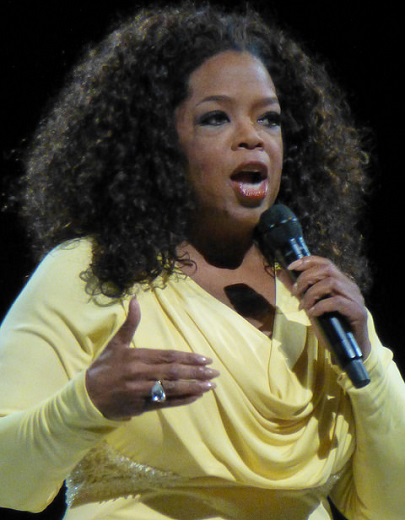 Oprah Winfrey has opened up about her alleged secret son. In an exclusive interview, Calvin Mitchell told The National Enquirer that the talk show queen claimed she would adopt him as a teen, but instead turned her back on him in a decision which left him headed for suicide. Oprah admitted to helping the young man and his family, but vehemently denied claims that the 35-year-old is her son.

The story of the famed journalist having a “secret son” recently went viral after Mitchell choked back tears during an interview. The truck driver said his birth mother refused to allow Oprah to officially adopt him, but that was the philanthropist’s original desire. Upon reaching high school age, the talk show host paid for the alleged secret son to attend a prestigious Christian-based boarding school in hopes of putting him on a path towards success. Despite Oprah’s pleas to remain at The Piney Woods School, a private school in Mississippi for African-Americans, the young man chose to drop out in his junior year because he was homesick.

Ashamed of his decision to leave the school Oprah so graciously paid for, it took a month for Mitchell to gather enough courage and attempt contact her. The young man said he went to Harpo Studios to see his mother-figure but was greeted by an assistant who allegedly advised Mitchell that Oprah was no longer dealing with him. After enrolling in high school a second time, while living in Chicago, the troubled youth dropped out again with claims that he fell into a deep depression and contemplated suicide after being shunned by the woman who supposedly once “mothered” him.

After leaving a taping of The Late Show, Oprah opened up about her alleged secret son after being confronted by him. She was reunited with him about three weeks ago when Mitchell approached the Emmy Award winner in New York City, outside of the Ed Sullivan Theater. After being estranged from the mogul for 20 years, the 35-year-old reached out to The National Enquirer, which supposedly arranged the interaction between the two.

Suspecting he had gone to the tabloids, Oprah questioned him about the secret son rumors. Upon realizing Mitchell had set her up, she was no longer interested in any communication with the young man. Oprah said he is not her son, although she did admit to having a child when she was 14. The baby died and she never had another child. When speaking of her own tragic upbringing the queen of talk said:

What parenthood takes one-on-one, I do not have. I don’t know if I have what it takes to do it correctly. I’m not maternal and have to put that down due to my unhappy childhood.

She met Mitchell when he only 11-years-old and developed a close relationship with the boy and his family after learning they were poor. She not only paid for him to go to two different private schools but moved his family out of the projects and into a better home as well as bought clothes for him. Despite Oprah’s efforts to help Mitchell, he was expelled from the first school and voluntarily dropped out of the second school. This, according to the actress, was the final straw and she and Stedman cut ties with the young man.

Admittedly disappointed that he would use this story to become famous at her expense, the Belief producer said instead of being hurt, she will view this as a learning experience. After the story of the broken relationship went viral, the talk show host decided to open up and share the truth about the alleged secret son who claimed abandonment so severe he almost took his life. Oprah stated she will continue to help others, but will use greater caution moving forward.