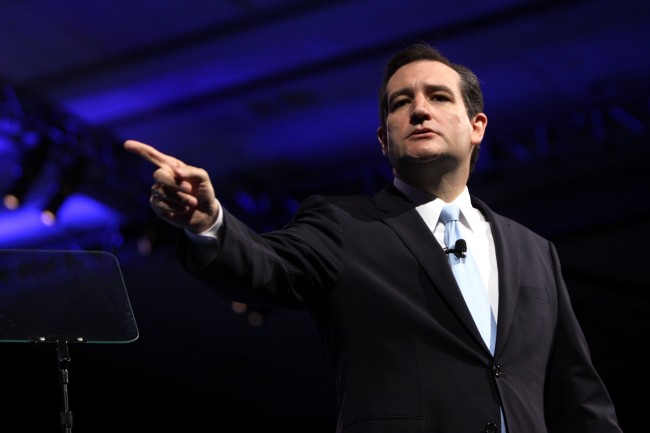 The poll results from Monmouth University showed 41 percent in support of Trump, with his closest rival at only 14 percent. A Quinnipiac poll reports Trump leading in Iowa by 28 percent.

Cruz’s official website says that he has been a diligent ally for liberty since day one because his family experienced first hand what it was like to lose their freedom. According to his father, he and his wife faced oppression in Cuba. Fortunately, they had a place to find refuge. The senator worries that if Americans were to lose their freedom, there would be no place for them to go.

When the presidential candidate served as solicitor general for Texas, he defended U.S. sovereignty against the U.N., and the right to keep and bear arms. He continues to battle Obamacare and opposes President Obama’s illegal amnesty. According to the Texas senator’s biography page, keeping his promise to speak the truth and defend America’s Bill of Rights has become a personal endeavor.

According to Huffington Post, this new triumph comes from supportive evangelical conservatives who shifted to Cruz from Carson. Evangelicals make up half of the voting Republicans in Iowa. Due to his show of support for the more conservative members of the party, the senator continues to gain momentum.

Last Sunday, Trump accused the senator of behaving like a maniac, as reported by The Washington Times. The lack of Trump’s verbal accusations toward the Texan in the past has led people to believe that the senator and Trump might be running mates. Recent outbursts from former reality TV star, Trump, however, indicate otherwise.

After Tuesday’s debate in Nevada, the Texas senator plans to embark on a seven-state tour to kick off the Christmas holiday season. His focus will be on the Southeastern Conference (SEC) primary. Afterward, the candidate will continue on to Minnesota, Virginia, Georgia, Alabama, Tennessee, Arkansas, and then Oklahoma. CNN says that his opponents have only painted the target on his back, and the next few weeks will demonstrate the accuracy of their verbal aim. The senator said he had not foreseen Iowa’s win and had planned to run more of a nationally-focused campaign. The question is whether or not he will be able to maintain his 73 percent lead, which has helped him to soar ahead of Trump.

Campaign spokesman Rick Tyler believes that the senator will be in a good position to win on Super Tuesday. He told reporters, “We’ve always believed that the GOP primary calendar gives Cruz an early advantage, so we have spent significant time in those states and have built an army of conservative volunteers to get out the vote – just like the ones we have unleashed in the first four early states.”

Despite Cruz’s recent surge ahead of Trump and Carson, he will need to work hard to ensure he continuously soars past his competition. This will include dodging any allegations and holding true to his promise of defending America and its Bill of Rights.

One Response to "Ted Cruz Soars Ahead of Donald Trump"