Hampton Road’s favorite holiday tradition is back again this year. Wave Church’s annual Christmas production, The Grinch: A Musical Production debuts on Sunday, Dec. 13, 2015. For the past five years, Wave Church’s Creative Department has presented the musical event “Scrooge,” but this year they are headed to Whoville to share a production based on the well-known book by Dr. Seuss, How the Grinch Stole Christmas. This year’s showing of The Grinch is free and open to the public, however, it is highly recommended that attendees arrive early to guarantee a seat for one or all of the three screenings which will replace the regular service times at 9 and 11 a.m. and 6 p.m. at 1000 Great Neck Rd, in Virginia Beach, VA.

According to Dave Hummel, Wave’s creative director, more than one hundred volunteers have been in collaboration since the beginning of the year preparing for the musical. The church’s auditorium and vestibule have been creatively altered to reflect the fantasy-filled town called Whoville. Attendees will enter the building to find a snow-covered whimsical town lined with buildings of pink, teal and gold, lighted Christmas trees and wrapped gifts. They will then be greeted by the Whos of Whoville before being escorted into the 2,500-seat theater to view the long-awaited production of The Grinch.

Despite the Grinch’s hatred for the season, he has become an icon of the winter holidays. This fictional character was created by Dr. Seuss and first appeared in 1957 as the main character of the infamous Christmas story, How the Grinch Stole Christmas.The term “Grinch” is believed to have derived from the French word “grincheux” which means grumpy; referring to a person who opposes Christmas time celebrations.

Nine years after Grinch’s 1957 debut, the story was adapted into an animated television feature. Then in 1977, a prequel to the 1966 film, directed by Charles M. Jones, was introduced to fans titled, It’s Grinch Night. This was 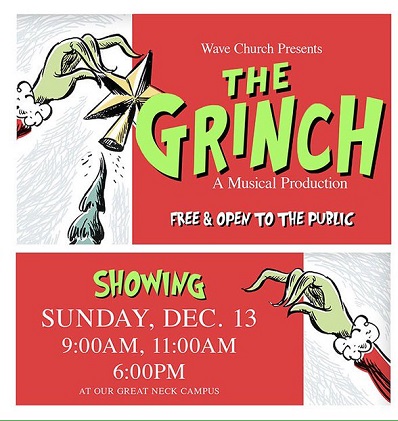 followed in 1982, with The Grinch Grinches the Cat in the Hat, which was also produced by Dr. Seuss, whose real name was Ted Geisel. In 2000, a live-action comedy film based on the Grinch, featuring Jim Carrey, was released on the big screen. The movie version was directed by Ron Howard and despite many mixed reviews, it was a major financial success. In 2006, The Grinch made its Broadway debut with a limited run and now this beloved story is making its way to Wave Church.

Hummel said the 2015 production draws from, both the movie and the children’s book. Just as any musical performed by Wave’s Creative Department, The Grinch will include original music and songs. The creative director explains it as “Dr. Seuss meets modern music.” The project has been a huge undertaking, according to Hummel, but well worth the effort. The Grinch is simply a gift to the community in celebration of the holiday spirit.

Bill Mozingo, the worship pastor at Wave Church, will take on the lead role as the flamboyant Grinch. He is a regular feature in productions presented by the church, including the hit musical Scrooge and Anchorman’s Ron Burgundy during the men’s conference at Wave. Getting into character for this major role will not be difficult for the father of three young sons. When speaking of Mozingo, the creative director said:

Mozingo is the perfect fit. He is insanely talented, and he writes great comedy. At times, he’ll interact and improvise with the audience.

The Creative Department at Wave Church is led by Dave and Sarah Hummel. The focus of this sector is to carry, capture and communicate the presence of God into every service.  As attendees of musical productions have witnessed in the past, The Grinch: A Musical Production will follow suit. Wave Church, led by Pastors Steve and 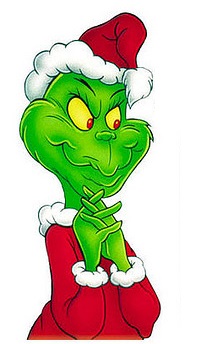 Sharon Kelly, is a worship experience geared towards the entire family. Kelly is one of the premiere voices for a new generation of believers. The ministry gifting of this dynamic duo has led thousands of people into a relationship with Jesus Christ, by simply sharing the message of God’s love, goodness, and grace. On this coming Sunday, the goal will be no different as people from all over Hampton Roads flood the auditorium.

The Grinch: A Musical Production, written, performed, directed and produced by Wave Church’s Worship and Creative Art’s Team, will take place Sunday, Dec. 13, 2015, at Wave Church, located at 1000 N Great Neck Rd. Virginia Beach, VA 23454. There are only three opportunities to witness this long-awaited event: 9 and 11 a.m. and the final showing will begin at 6 p.m. For additional information concerning The Grinch, please contact Timna Jones at (757) 481-5005 or email at [email protected] If you can get there, be there; you do not want to miss it!