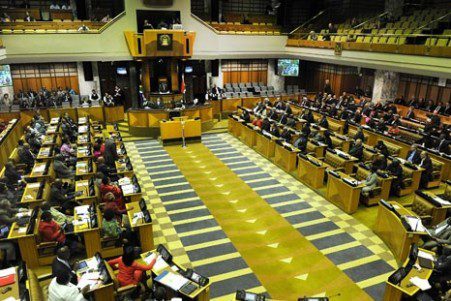 The African National Congress (ANC) ruling party of South Africa are now able to steal and eat the workers’ pension and provident fund money with ease, and as fate would have it, the ANC have apparently started stealing the money. The United Democratic Movement’s (UDM) Bantu Holomisa has filed a complaint with the Public Protector, Thuli Madonsela. Holomisa is alleging that the ANC took money from the Public Investment Corporation (PIC), the government employee pension fund manager bequeathed to the country by the previous government of Bophuthatswana, to pay the December salaries of ANC staff. The ANC allegedly also took money from the PIC to fund its January 8 bash, held in Rustenburg two weeks ago.

South African President Jacob Zuma recently signed a new tax bill into law prohibiting workers from accessing all pension and provident funds without consultation. The Congress of South African Trade Unions (COSATU) is angry and has started to tell members not to vote for the ANC in the upcoming local government elections. After the ANC went on a borrowing spree, sucking the state coffers dry, they now want unlimited access to the workers’ pension and provident funds.

The ANC is doing exactly what former apartheid president P.W. Botha’s regime started doing. Although what the Botha regime did was use the money from the Government Employee Pension Fund (GEPF) to fund government programs. The ANC is obviously going to steal it for the party and individual benefits. The GEPF was saved by the Bophuthatswana Fund with its SEBO, what is today called the Public Investment Corporation, which invested in shopping malls, office blocks, the hotel industry, private hospitals, and other vehicles that generated revenue over and above the employee contributions. That fund took GEPF from 57 percent funded to fully funded.

Holomisa never rushes to the public protector without substance, and the allegations have merit. The ANC’s Zizi Kodwa has already attacked and accused Holomisa of grandstanding. It is the arrogance and abuse of power, that is a prioritized agenda, which rises above all the problems South Africa is facing. The ANC has been caught with its hand in the cookie jar, and Kodwa, speaking on behalf of the ANC, will never admit to the truth.

The ANC has plundered and exhausted state resources, including the money they have borrowed; now the ruling party will exhaust the workers’ money. It is like a father stealing all the family money, selling the property, and raiding the children’s money box.

South Africa needs intelligent voters, not emotional ones. It is sad that in South Africa, there are millions of uneducated people who always vote for the ANC. The real reason for passing legislation to hold on to workers’ money is not just to look at the estimated 1.5 trillion ZAR fund; it is to steal the money. The election campaign needs to be funded, and with the pension money, it will now be easier for the ANC, which does not care.