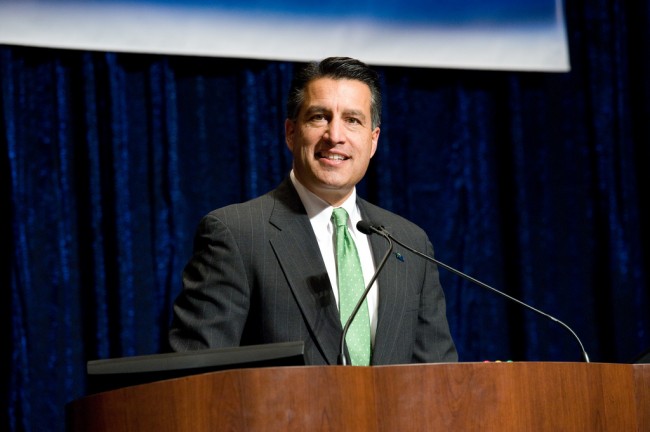 Nevada Governor Brian Sandoval is apparently making a series of robocalls in support of Republican incumbents. It appears that the governor is re-paying the favor for their continued support of the largest tax hike in Nevada history.

The group of establishment Republicans the governor is promoting with the robocalls are those who, in 2015, voted for the Commerce Tax. These Republicans adamantly vowed during their campaigns in 2014 that they were against raising taxes. Contrary to their promises, once elected, they not only supported, but voted for, the governor’s tax package.  Nevadans voted against this tax in 2014. However, in 2014, it was called the Margins Tax.

Sandoval also vowed he was against raising taxes during his campaign bid for re-election. However, it has since been revealed by the Senate Finance Committee that the governor’s team had been preparing the budget, which included the massive $1.4 billion in new taxes, for over a year. His team worked on this the same year Sandoval was campaigning against tax increases.

A group of insurgent candidates, known as the Majority Project, are working hard to remove the incumbent Republicans, who campaigned one way, but then voted the opposite. The governor and his team are feeling the pressure of an angry electorate who feel betrayed by establishment Republicans. The danger of defeat is real and prompted the robocalls by Sandoval.

The candidates who may be receiving special attention by the governor:

In a surprise move, Nevada’s Republican leadership appointed the freshman legislator Armstrong to chair the Committee on Taxation during the 2015 legislative session. There are allegations that this appointment was supplemented with a $5,000 donation to Armstrong from Sandoval during a heated battle for leadership positions in 2015. The “Las Vegas Review-Journal” reported that Edwards and Armstrong received donations from the governor after they were elected in November 2014.

Armstrong campaigned against raising taxes and ending the Sunset Taxes. However, once elected, he voted for the largest tax increase in the state’s history, as well as wrote the bill. Armstrong also voted to make the Sunset Taxes permanent – in complete opposition to what he promised during his campaign.

Governor Sandoval is supporting Anderson, Edwards, and Armstrong in their bids to maintain their seats in the state legislature. He is doing so by actively supporting their campaigns through the use of robocalls.

Nevada Governor Makes Robocalls for Establishment Republican Incumbents added by Lucy Lane on May 27, 2016
View all posts by Lucy Lane →