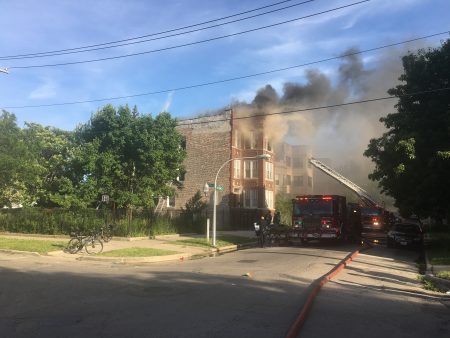 There was a residential building fire in the North Lawndale neighborhood of Chicago on June 12, 2016. Miss Harris’ daughter, grandchildren, and other family members had celebrated Harris’ birthday in the Harris home, near West 19th Street and South Harding Avenue.

Yesterday, June 11, was a celebration for the family as they honored Harris. According to Untrail D. Boyd, Videographer for Guardian Liberty Voice, the blaze began at about 6:20 p.m. CDT. He commented that the Chicago Fire Department seemed to take quite a while to respond, “and they are right down the street.” The people who were present when the fire began managed to escape injury and all are safe.

There is the presumption that the barbecue, which was located on the back porch, may have been the origin of the blaze. However, it is too soon to make the determination about the flame’s source. Fortunately, the structure is not a total loss. The Chicago Fire Department managed to extinguish the flames. Boyd added two engines arrived to fight the fire and it appears the only damage was to the third floor.

The Chicago Police Department also arrived to investigate and for crowd control. Guardian Liberty Voice will provide updates when they become available.

All Images Courtesy of Untrail D. Boyd – Used With Permission

One Response to "Residential Building Fire After Family Celebration in Chicago"