By DiMarkco Chandler on January 1, 20192 Comments 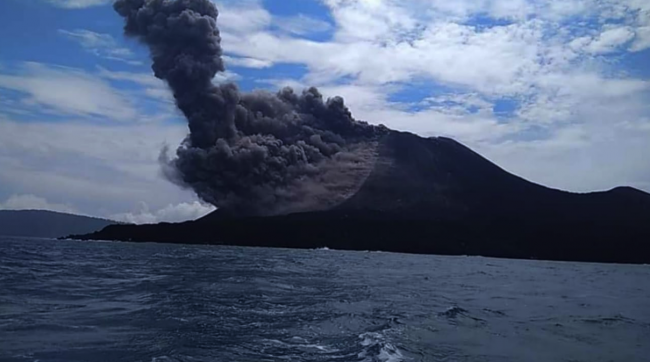 While rescuers were still working to recover bodies from a devastating Indonesia landslide, the nation is hit by a 5.0 magnitude earthquake.

According to U.S. Geological Survey (USGS), the shake occurred at around 117 km from Maumere, East Nusa Tenggara, Indonesia.

2018 proved to be a disastrous year for people living on the Southeast Asian Islands. Beginning in June 2018, the Anak Krakatau volcano launched a string of eruptions that ultimately caused a deadly tsunami that took more than 2000 lives on Dec. 22 of last year. It was reported that a block of the volcano slid into the ocean causing an underwater landslide which triggered the surprise Indonesia tsunami.

But even before the Indonesia nation was hit with last year’s deadly tsunami, a 7.5 magnitude earthquake hit the nation on Sept. 28, 2018. It caused more than 2000 deaths, damaged at least 3000 homes while injuring approximately 8,000 people.

Today’s Indonesia landslide and subsequent 5.0 earthquake has extended the country’s disaster into the new year. According to NPR, fifteen people have lost their lives and more than twenty are missing as a result of the recent landslide. Perhaps the good news, if there can be something positive to report during Indonesia’s recent calamities, is that no damage or loss of life has been reported following the 5.0 tremor that followed today’s landslide.

Unfortunately, on Dec. 30, at the close of 2018, Indonesians suffered through a killer tornado which took the life of one person and damaged 165 homes as reported by their mainstream alternative news site, YoNews and The Watchers at Watchers.News. According to The Watchers, 9 others were injured by the twister.

Part of the reason that this part of Southeast Asia is susceptible to these kinds of natural disasters is because “Indonesia is an archipelago that includes thousands of volcanic islands.” Over a period if time as the shifting of plates molten rocks have moved and exerted pressure the area has become extremely volatile especially in areas where slabs of earthly crust has clashed with tectonic plates creating earthquakes as they move below and above and into each other. It is an area formerly titled The Ring of Fire, where 90% of the world’s earthquakes occur and where 75% of the known volcanoes are located. Indonesia is home to Mount Tambora which erupted in 1815 and to this day is the largest volcanic explosion in reported history.

Featured and Top Image photo from Andi’s local guide and friend in Carita, Lanik and Roman