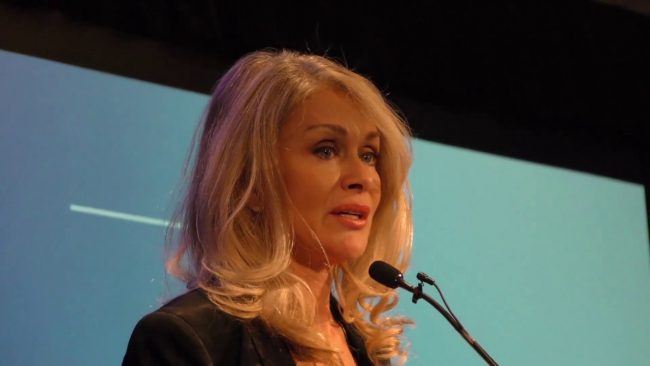 Denise DuBarry Hay, who helped build the film industry in Coachella Valley died on March 23, 2019, at UCLA after fighting a deadly fungus reported by her husband, Bill. Hay was 63 years old.

Dubarry Hay started in the entertainment business as an actress appearing in multiple television shows. Her most memorable role was on “Blacksheep Squadron” portraying  Lieutenant Samantha Green.  She also appeared in episodes of “CHiPs.”

The actress also appeared in the Academy Award-winning movie “Being There.”

Despite having a steady acting career, her greatest accomplishment was founding Thane International in 1990 with her husband Bill in 1990. Located in La Quinta, the company became one of the world’s largest global direct response companies.

In 1998 Dubarry Hay was named “Ernst & Young Entrepreneur of the Year.” Response Magazine added her on their list of the “21 People Leading Us Into the 21st Century” in 2000.

DuBarry Hay also was active in the nonprofit for at-risk and abused children organization in the Coachella Valley Olive Crest.

Kim Waltrip, film producer, who was responsible for recruiting DuBarry Hay for the board of directors at Olive Crest said she was aware of her health issues for the last two months. She said it still shocked her when she received by text message the news she had died.

She was also president and founder of the Palm Springs Women in Film and Television. Recently she acted, and executive produced “Walk to Vegas” which was played at the Palm Springs International Film Festival.

Dubarry is survived by her husband and son Adam, and daughters Samantha Lockwood and Whitney Hay. A private memorial service will take place in April.