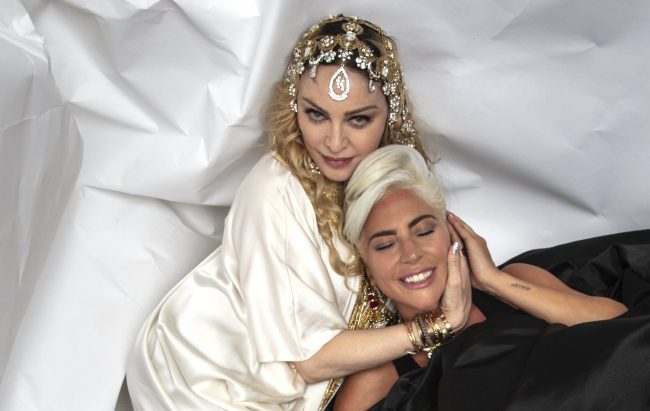 In February 2019, Madonna who is 60, appeared very calculated at the Oscar party hosted by the material girl, and Guy Oseary, her manager.

There were hardly any photos published from the event.  However, Madonna posted on her Instagram a picture showing her snuggling with 33-year-old Lady Gaga, after her song “Shallow” won the Best Song Award at the Oscars.

It has been rumored that Madonna was feuding with Gaga due to jealousy.  The feud went on for many years, and Madonna has said that younger stars emulated her, and copied her.

It was reported to Page Six by a source that Madonna (who goes by the nickname “M” to her close friends) the reason why she took the pictures with Gaga was that the “Material Girl” wanted to show her love and support after she won the award.

However, a music insider said something differently, stating that everything done was just for show. “After all, she is Madonna.”

Continuing, the insider said Madonna does not change. She has to be the center of everybody’s attention, and everyone must talk about her.

Madonna’s “Like A Prayer” album was released thirty years ago, and the video for the title track created a moment which was one of her most controversial, and the singer still knows how to make the most out of the amount of time she is center stage.

Madonna is now preparing to release (in possibly May or June) her first studio album in four years.  The New York Post has verified the singer will be performing at the Eurovision contest being held in May in Tel Aviv.

It is rumored she will sing new songs as well as her popular hits.

It makes sense for Madonna to be seen with superstars like  Lady Gaga, who are younger and will put attention on her.

Maluma recently posted a picture of the two flirting on his Instagram.

This type of behavior is nothing new to Madonna, and it is part of her plan to keep herself the center of attention.

Recently, she took some time off to be a “soccer mom” as she described herself.

She moved her family to Lisbon, Portugal. Her 13-year-old son David trained for soccer there.

Sources report Madonna wants to return to the stage. However, one music executive told Page Six:

She was a huge pop star at one time, then things were derailed, she got kooky, and people lost interest.

People do not talk about her anymore, whereas the entire world wants to know if Ariana Grande drank a milkshake or crossed the street.

Madonna’s last comeback started in August 2018, when she appeared on the VMAs on MTV to pay respect and tribute to Aretha Franklin, who recently died.

This was a disaster. In her speech, meant to tribute the “Queen of Soul,” Madonna made a passing reference to the singer and focused on her early musical career.

Madonna posted on her Instagram that did not intend to tribute Franklin, as it would be impossible to do in 2 minutes with all the noise of an award show.

As for dating, since Madonna divorced Guy Ritchie in 2008, she has dated multiple younger men.

She broke up with her backup dancer, Brahim Zaibat, the man she dated from 2010 to 2013. This happened after she learned that Nicole Winhoffer, her ex-trainer also slept with him.

In 2016, she said in the Phillippines at her concert “I had a Filipino trainer once – this beautiful girl f***ed my boyfriend, so she was fired.”

Model Aboubaker Soumahor lived with Madonna and her children in her Upper East Side apartment. Page Six reported she ended it in 2017 because things became strained during the custody battle she was involved in with her ex-husband.

Recently, it is rumored Madonna is dating model Kevin Sampaio, who is 30 years younger than her. In 2015, Sampaio appeared in her “B**ch, I’m Madonna” video.

30 years ago I released the single “Like a Prayer” and filmed a video that caused controversy because I danced in front of crosses that were burning, and I kissed a black saint.

I also made a Pepsi commercial which was banned due to my video. Happy Birthday to Me and the Controversy!

Page Six: How Madonna is using younger stars in hopes to stay relevant