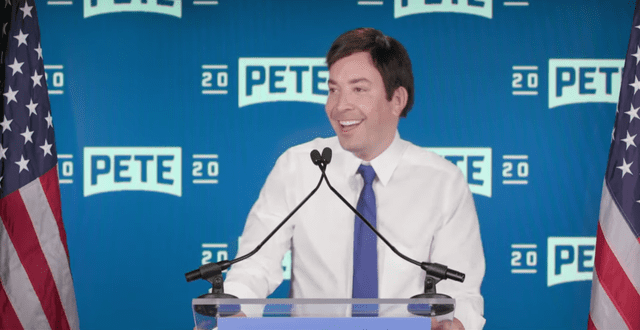 Buttigieg, who is now third in the polls, and his popularity has been surging, is the youngest Democratic candidate in the vast field, and if elected, would become the youngest in the history of the United States.

Fallon stopped his prepared monologue to impersonate Buttigieg. Fallon slicked his hair down and rolled his sleeves up on his highly starched crisp white shirt. Fallon also pitched up the tone of his voice.

What Fallon did the most in the sketch, was poke fun of Buttigieg being relatively new to the political process.

Impersonating Buttigieg Fallon said: “When I was 14-years-old, I knew when I grew up, I wanted to be President. Boy, how those two years have flown by quickly.”

He also said: “I am an Oxford Rhodes Scholar, a former Navy lieutenant, and I am the two most intelligent children in the entire world stacked one on top of each other.”

Most of Fallon’s jokes had to do with Buttigieg’s name, which everybody has difficulty pronouncing. Kimmel joked that his name “Pete” also did not sound presidential.

Fallon said “If elected, he would be our first president who is openly gay. It would be President Pete! That sounds like a film where Kevin James ends up in the White House.”