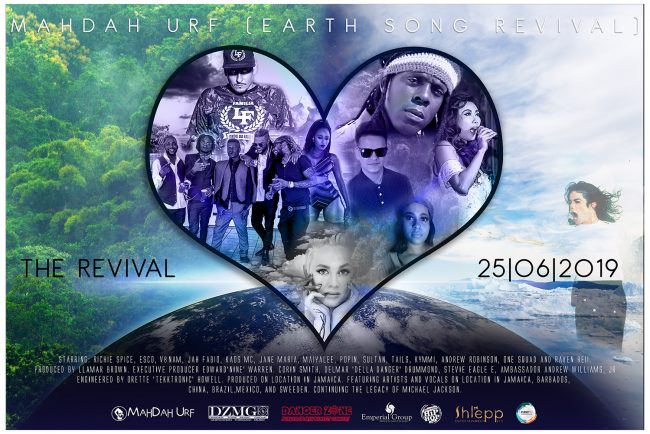 International artist from all over the world representing Jamaica, Barbados, China, Brazil, Sweden, and Mexico combine on a new track ‘Mahdah Urf (Earth song Revival)’ to call for change on the environment and to pay tribute to Michael Jacksons ‘Earth Song’ and his legacy on environmental issues. The song also pays homage to the Lil Dicky track ‘Earth’. This new version on the ‘Earth’ Theme is led by Jamaican artists and produced in Jamaica with a reggae flavor celebrating reggae being added by the UN to its list of cultural treasures.

“Earth Song” features a host of stars from around the world fusing several styles in a reggae vibe as varied as Opera and Rap. Artists on the track includes – Ritchie Spice, Esco, V8Nam, Sultan, Talis, Popin and Maiyalee (known as One Squad’) along with, Kaos MC, Jane Maria, Raven Reii, Jah Fabio, Kymmi and Andrew Robinson.

Produced by Llamar Brown and executively produced by Edward ‘Nine’ Warren, Corin Smith, Delmar ‘Della Danger’ Drummond and Stevie Eagle E. “Earth Song” is scheduled for release on the 15th of July on Shlepp Entertainment/Shlepp Records. Vocals were recorded in multiple locations and put together in Jamaica.

All the artist on “Earth Song” will hope to join Grammy Award-winning artist Buju Banton and other international stars at the first ‘Border Splash’ concert event to be officially launched in Europe on July 31, 2019, at the SEG Arena in Geneva, Switzerland. Border Splash series of events are focused on environmental awareness and change and it is hoped that the ‘Mahdah Urf (Earth song revival) track and artist will kick off the proceedings and become a rallying cry for change around the world.

Executive Producer for “Earth Song” Stevie Eagle E says: ‘This is about change, initiating a change in respect to how people treat this planet. It is not about stars or names it’s about averting a catastrophe. Music is a powerful tool to facilitate awareness and change and we felt it was time for us ‘People of color’ to make a positive move to the front on this environmental issue as Michael Jackson did and visibly join forces with all those who see the danger and wish to do something about it.’

The track is available to stream at www.Urflove.com and will then be available on all major streaming and download platforms from the 15th of July. The parties behind Mahdah Urf (Earth song revival) and the Border splash series of concerts are looking to tackle environmental issues head-on and have put an impressive team together which is led by Corin Smith and the Bermuda based Emperial Group, along with Danger Zone Music Group, Cutting Edge Technology Solutions, Urban Broadcast TV Network, Shlepp Entertainment Ltd, Big Regga and, Da Beatz promotions.

Generation Hip Hop who represent 58 countries worldwide and Planet 911 make up an impressive group which continues to grow behind the Mahdah Urf movement and the Border Splash series of concerts.
To hear the track and find out more visit www.Urflove.com.