Body Positivity and How Lizzo Rocks the Movement 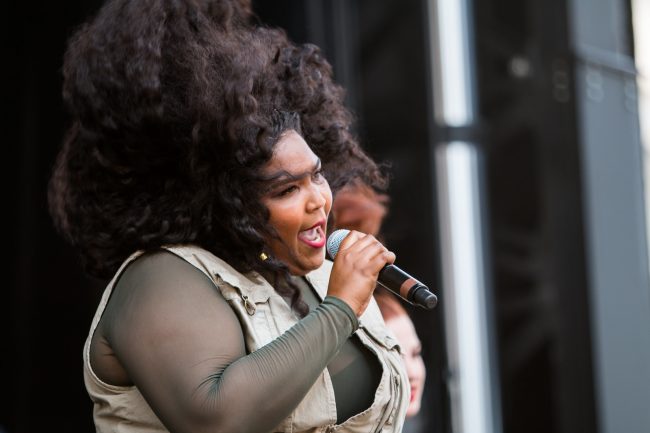 CNN analyst Lisa Respers France would like to declare Lizzo as the patron saint of large women due to her body positivity.

She believes that Lizzo’s “ability to turn out hits and performances that celebrate her curves and manage to help us celebrate our own bodies too.”

Lizzo is having a “hot-girl year” when it comes to music and body positivity. She writes bold sexual lyrics and is willing to show off her full-figured body. In addition to all this, she is often on the radio and she is receiving a multitude of media coverage about her breakthrough album, “Cuz I Love You.”

The full-figured singer has positioned herself at the forefront of pop culture. However, France feels that too much focus on Lizzo as a warrior for body positivity takes away from her talent.

In 2014, France wrote a first-person essay about her personal struggle with body positivity titled, “A fat girl gets naked.” The result? France was hailed and roasted on social media and across the internet.

In particular, one comment stood out to her. The person complained that her writing disrespected those who do not feel there is anything wrong with larger bodies. The woman suggested France seek therapy to discover what the issues were, instead of blaming her weight.

There were others who praised France for her willingness to share her story on television and be outgoing despite her weight complex.

In May, Lizzo appeared on NPR’s “Fresh Air with Terry Gross.” They discussed how curvaceous women in the entertainment industry are trailblazers to many. The two talked about Lizzo’s album cover in which she is posed tastefully nude. Gross stated:

It sometimes bothers me ‘cause I think like, oh, are you making yourself into a sex object for men? When you’re doing it on your album cover, I think it’s a really bold statement, and it’s a statement for women. Because you are trying to break the mold of what beautiful is.

Yeah, but are you only saying that because I’m fat? Because I feel like if I were a thin woman, maybe that wouldn’t be the case. I feel like women who are smaller aren’t really given the opportunities to be body-positive or role models, because we’ve been conditioned to believe that women are using their bodies for the male gaze. And I think if I were slimmer, I don’t think people would look to me with the same type of like, ‘Oh, wow; she’s so brave; she’s doing this and representing everyone’ – that they would. You know [what] I’m saying? Because I’m big.

Lizzo is so much more than a talented rapper, singer, and songwriter. She might be the reason more little black girls will be playing the flute. She has been playing the instrument since she was 12, and it is part of her live performances.

There is more to Lizzo than her body positivity and talent. She is authentic, confident, and she is honest. According to France, Lizzo would become famous if she were a cashier at the Dollar Store.

Wear a Bikini if You Want to

There are times when her weight and body positivity attracts more attention than her talents. France thought about this when Mindy Kaling posted pictures of herself in a two-piece bathing suit in July. The caption read: “IDK who needs to hear this but…WEAR A BIKINI IF YOU WANT TO WEAR A BIKINI. You don’t have to be a size 0.”

The “Late Night” star was being praised for her bravery. However, Kaling is not overweight, but that does not take away from her body positivity. In today’s society she would be considered “plus size.”

What draws people to stars who wear whatever they want, regardless of their size? More people look like Lizzo and Kaling than Kendall Jenner or Gigi Hadid, so why do people act as if these body-positivity stars are leading a fat revolution?

Body positivity is part of Lizzo’s narrative, because it is part of who she is. However, she has talked about how being black and a nerd have contributed to her personality beyond her body size.

In an interview for V magazine, with fellow singer Sam Smith, Lizzo stated that her entire life, she has felt excluded.

If fans hail Lizzo for being a trailblazer for large women, they are giving more weight to who she represents rather than how she represents.

Remember, it was her talent, not her body positivity and her weight that earned her that place on stage.

What Has the Body-Positivity Movement Changed?

The body-positivity movement has garnered serious attention over the last 10 years. According to a recent report published by the American Psychological Association, American women and men are not satisfied with their own bodies. The decline began in the early 2000s after peaking in the ‘90s.

Popular media outlets and marketing campaigns have adapted to this trend, but not necessarily for the better. In 2012, Seventeen Magazine agreed to stop airbrushing models. In 2015, Women’s Health banned titles, such as “Drop Two Sizes” and “Bikini Body” from the cover of the magazine. Sports Illustrated featured plus-size model Ashley Graham in one of three cover images for their annual Swimsuit edition in 2016.

In July 2016, Miss Teen USA dropped the swimsuit competition. This was part of their commitment to evolve in ways that will celebrate women’s strength, confidence, and beauty. Additionally, Aerie, Dove and Victoria’s Secret are among many companies that have tried to incorporate body positivity into their efforts in advertising.

What Is Body Positivity?

Dunn defines body positivity as “accepting the body you have as well as the changes in shape, size, and ability it may undergo due to nature, age, or your own personal choices throughout your lifetime.” It is understanding one’s worth and what is happening physically to the body are separate entities; no matter what is happening in one’s body or outside the body, it does not mean anyone is less worthwhile than the person next to them.

Prins thinks of body positivity as acceptance of one’s body the way it is. The idea that anyone can live comfortably inside their own skin, or work on treating the body right through “nourishment and joyful movement” without punishment.

Psychology Today spoke with the data crunchers at Whisper who determined that 35.1 percent of people define body positivity as “being okay with flaws,” 29.3 percent says it means “loving yourself,” 21.1 percent believes it is “being confident,” and 14.5 percent define it as “appreciating your body.”

Sobczak says that it is important for one to take responsibility for the needs of the body to become body positive. It is more difficult than having an outside expert say what to eat and how to move. She says that response ability is “the ability to respond to the stimuli present.” In this specific case, it is the ability to respond to hunger sensations or fullness combined with the need for movement or rest.

She encourages people to understand that life and circumstances do not make it easy to take care of one’s self, it is at these times making the best possible choice in the moment is best. It is important to trust one’s own ability to know what feels best for one’s unique body. Learn by trial and error and be kind once making a mistake.

Another way to be body positive to examine messages received and those one continues to receive throughout life about health, weight, food, and exercise. Pay attention to the media and medical professionals as well as family, friends, and culture. Once the messages have been clearly identified, think about them in a critical manner and choose the ones that personally work.

If certain information is intriguing, explore it and observe. How does it feel? Will it lead to better mental and physical health? Is it something that can be realistically sustained long term?

Additionally, one can determine which messages trigger guilt and shame. If the information does not improve life, or it cannot be maintained over time, dump the idea. Do not blindly follow the advice of an expert. Diets are not always necessary. Oftentimes, a condition will improve through the increasing of physical activity and making dietary and lifestyle changes. It is important to listen to the signals from within to make this type of decision.