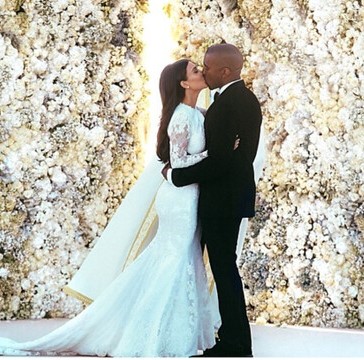 Kim Kardashian West recently revealed her personal awakening after struggling to adjust to her husband’s newfound convictions. Kanye West no longer likes seeing his wife wear outfits that are too sexy, especially in public, after declaring that he is a born-again Christian. A debate between West and Kim over a revealing custom designer dress that ensued the night before the Met Gala in May was featured during an episode of “Keeping Up With the Kardashians.” In that episode, West expressed how his wife’s decision to wear sexy clothes in public negatively affects him. Kim explained that she is not on the same path as him, referring to his newfound faith in Christ.

The skintight Thierry Mugler designer dress that Kardashian West wore featured a corset to accentuate her curves. The nude color dress was made to look like she was naked with water dripping off her body. Prior to West’s transition, this style of dress would have been encouraged. During the episode, the rapper had this to say:

I just went through this transition from being a rapper, looking at all these girls and looking at my wife, like, ‘Oh, my girl needs to be just like the other girls showing her body off,’ I didn’t realize that it was affecting my soul and my spirit as someone that’s married and the father of now … about to be four kids. A corset is a form of underwear. It’s hot. For who, though?

At that time, Kim expressed her discomfort with his requests pertaining to her style. She felt as if it was his journey and not hers. As his wife, she maintained support for him and his new beliefs. However, the television personality was not fully on board with the life transformation and assured her fans that she will not be changing, despite her husband’s highly publicized spiritual journey. It is no secret that Kim found fame by flaunting her curves and body. Hence, she was not ready for change. However, now after her personal awakening, she has decided to comply with her husband’s wishes. The model said:

I don’t know if it’s the fact that my husband has voiced that sometimes too sexy is just overkill, and he’s not comfortable with that. I listen to him and understand him. Still, at the end of the day, he always gives me the freedom to be and do what I want. But I have kind of had this awakening myself. I realized I could not even scroll through Instagram in front of my kids without full nudity coming up on my feed pretty much all the time.

I also did think, like, I’m here in the White House and then the next day I was posting, like, a crazy bikini selfie. And I was thinking, I hope they don’t see this. I have to go back there next week.

The couple have four young children together: North, Saint, Chicago, and Psalm. Kanye is Kanye to everyone except his kids. To his kids, he is dad, and for him, that is identity number one. After becoming a born-again Christian, he has become a bit stricter as a dad and very forceful on the imagery that is in the household and what they see. As parents, he and Kim maintain a united front when raising their children.

Kim has always voiced support for her husband and agreed with the new parental guidelines. But, as far as her own image was concerned, she wanted to decide for herself. Since her recent personal awakening, she is now on a path of less skin and more clothes. This is only the beginning of the reality television personality’s awakening process. Fans eagerly await the next junction of the Kardashian-West journey.