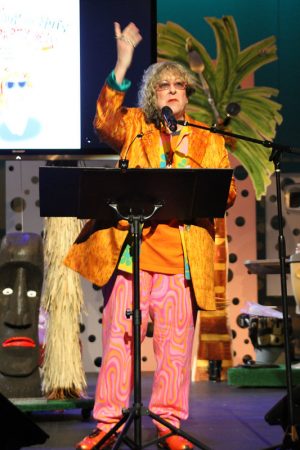 Allee Willis, the songwriter who wrote the iconic “Friends” theme song, as well as hits for Earth, Wind & Fire, The Pointer Sisters, and Pet Shop Boys died on Tuesday, Dec. 24, 2019. She was 72 years old.

The songwriter was a two-time Grammy winner who grew up in Detroit. She moved to New York to work for Columbia and Epic Records as a copywriter before she began writing her own songs, which included “September” and “Neutron Dance.”

Additionally, she collaborated with Bob Dylan, James Brown, and Herbie Hancock. Willis co-authored the music for “The Color Purple” Broadway show. In 2006, the score was nominated for a Grammy for best musical show album and a Tony nomination in 2006 for the original musical score.

It was “I’ll Be There for You,” sung by The Rembrandts and written with “Friends” creators David Crane and Marta Kauffman that was her best-known song. It earned her a 1995 Emmy nomination.

In 2018, Willis was inducted into the Songwriters Hall of Fame with more than 60 million record sales to her name.

Nile Rogers posted on Instagram: “I just woke up Christmas morning and saw this heartbreaking news. Dearest Allee, your family, and friends have my sincerest and most heartfelt condolences. Your music will continue to bring happiness to me and the billions of sisters and brothers you’ll forever touch in this universe. RIP, love and happiness.”