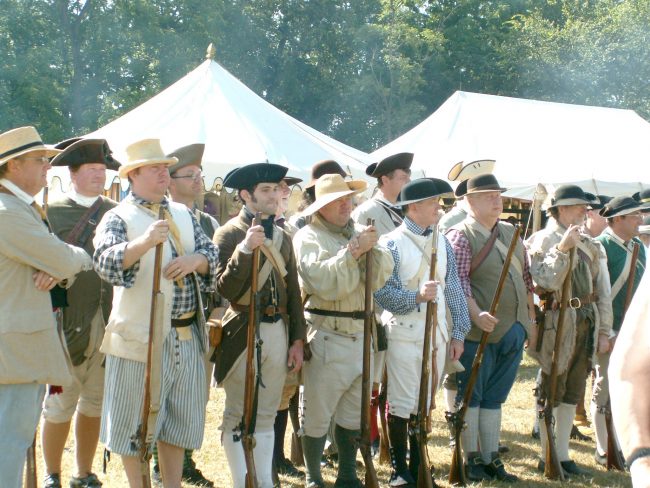 Lawmakers in Virginia are preparing to pass a draconian gun control bill that will make most guns in the state illegal. Nevertheless, as per the Constitution, Tazewell County as put together an active militia.

After the most recent election, the state’s House and Senate are both Democrat majorities and they haven’t wasted a moment in attempting to gut the gun laws in what has historically been a permissive state.

The so-called ‘assault weapon ban’ is SB16 and has that perilously vague wording we all know to be incredibly dangerous. In some interpretations, this law, if it passes, could make illegal the ownership or transportation of any semi-automatic gun because extendable magazines are available for it – and you don’t even have to have the extendable mags.

Not surprisingly, many Virginians are outraged by this idea and the discussion of a “grandfather clause” that allows one to keep their semi-automatic weapons as long as they are registered.

In response to the rebellion, Virginia State Representative Donald MacEachin called in the National Guard.

And ultimately, I’m not the governor, but the governor may have to nationalize the National Guard to enforce the law,” he said. “That’s his call, because I don’t know how serious these counties are and how severe the violations of the law will be. But that’s obviously an option he has.”

Maj. Gen. Timothy P. Williams, the Adjutant General of Virginia’s National Guard responded on Twitter: “We understand and respect the passion people feel for the U.S. Constitution and 2nd Amendment rights. We will not speculate about the possible use of the Virginia National Guard.

However, based on the twitter responses, Maj. Gen. Williams’ words were not comforting.

A Militia Is Forming in Virginia

Tazewell County is taking this threat to the Second Amendment seriously. They have not only passed a Second Amendment Sanctuary resolution, but they have also officially begun to form their own militia.

Just this past Tuesday, on December 10th, the Board of Supervisors from Tazewell County passed two different resolutions in light of the controversy circling those who are pro-gun. The first resolution declared the county to be a second amendment sanctuary. This is not at all surprising to see, as 76 out of 95 counties, 9 out of 38 independent cities, and 13 towns have adopted second amendment sanctuary resolutions.

The second item on the agenda was the proposition of establishing a militia in the county. When both of the resolutions passed, the crowd cheered loudly in support of the decisions. Also, the resolutions didn’t exactly pass by a small margin; the votes were unanimous, with more than 200 citizens standing by in support.

County Administrator Eric Young explains why the county opted to form a militia:

Our position is that Article 1, Section 13, of the Constitution of Virginia, reserves the right to ‘order’ militia to the localities. Therefore, counties, not the state, determine what types of arms may be carried in their territory and by whom. So, we are ‘ordering’ the militia by making sure everyone can own a weapon.

Thus, is anyone from the state tries to remove the Sheriff from their elected office because they refuse to enforce unjust laws, those state officials will be faced with a lawful militia composed of citizens within the state.”

Citizens of Tazewell County are undergoing extensive training to make sure everyone is acting safely and responsibly. It is anticipated that other counties will also form a militia. The Virginia legislature may want to reconsider taking the guns of rural citizens.

Additionally, there is an anti-paramilitary bill. It is likely not a coincidence that while militias are being formed, there is a bill being formed to make them illegal. Here is some of the text of SB64:

“A person is guilty of unlawful paramilitary activity, punishable as a Class 5 felony if he:

It appears that all along the plan was to confiscate guns and make any organized resistance a felony.

Lawmakers MUST remember the Constitution of the United States reads, “A well regulated Militia, being necessary to the security of a free State, the right of the people to keep and bear Arms, shall not be infringed.”

The pledge these lawmakers swore reads:

Every person in the government who has sworn this oath yet supports these unconstitutional bills should be immediately recalled and possibly even tried criminally to set an example that we will no longer tolerate the systemic dismantling of our rights.”

It is believed by the author for Prepper Lifestyle that someone with a lot of money is behind this attack on the Constitution. He notes that Michael Bloomberg’s PAC donated millions of dollars to turn the legislatures of 24 states into a Democrat majority. His millions of dollars worked in 21 of those states and Virginia was one of them.

Records filed so far show that organizations controlled and funded by Mr. Bloomberg spent more that $41 million on 24 House races, much of it on eye-catching ads rolled out on social media and broadcast on television in the crucial final days of the campaign.

And while it’s impossible to conclude that any one factor tipped the balance in a race, Mr. Bloomberg appears to have reaped the benefits of his millions in giving. Democrats won 21 of the 24 races he sought to influence. Of those, 12 had been considered either tossups or in Republican districts.

‘The mission was to flip the House. Success or failure would be defined by that,’ said Howard Wolfson, a senior adviser to Mr. Bloomberg.”

Bloomberg is ant-gun and has said that “ending the nationwide madness of U.S. gun violence is the impetus behind his run for the White House.

The Summary of What Is Happening in Virginia

It would seem at this point the only way to prevent bloodshed would be to not pass these bills. However, Bloomberg paid millions of dollars to get people elected who promised to pass strict gun control bills. If they choose to vote against these bills, they will have to face angry constituents and Bloomberg.

It seems unlikely that rural Virginia will back down. They are preparing for a fight. They have a month to get organized and defend their communities.