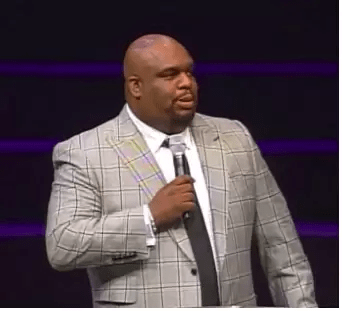 After being on the air for three seasons, the Oprah Winfrey Network (OWN) has decided to pull the plug on Pastor John Gray’s “The Book of John Gray,” News of the Reality TV show being canceled came days after a former employee of Gray’s Relentless Church filed a lawsuit claiming the pastor owes him tens of thousands of dollars in unpaid wages. The series is a docu-follow hybrid about the life of John Gray and his uniquely humorous way of helping people.

As a result of the controversies involving the pastor, some fans of the show said early last year that they had no plans to tune in and watch Season 4 — perhaps an indication that sagging ratings and viewership may have played a role into the decision against renewing the show. Among those controversies were an apparent scandal that involved an extramarital affair that Gray seemed to acknowledge before insisting the relationship, while inappropriate, was not physically cheating with “that strange woman.”

That led to his controversial purchase of a Lamborghini Urus for his wife, Aventer, for their eight-year anniversary in December of 2018. Gray defended that extravagance in the face of widespread criticism. However, many still believe that controversy may have provided a glimpse into Gray’s spending habits, which could have contributed to his current situations that each have finances in common.

Not long after gifting his wife a luxurious car, Pastor Gray appeared on the talk show “Sister Circle” as a guest. When referencing his wife, he spoke about how immature he was and how much pain his wife endured while he navigated the growing pains of manhood. This seemed to speak to his desire to lavish her with expensive “rewards.”

However, the megachurch pastor who leads Relentless Church in Greenville, South Carolina, received backlash for this decision. He responded on social media via Facebook Live:

What should concern people who are actually genuinely concerned is ‘did this man use any money from the church to do this?’ And the answer is no, absolutely not.

Many critics voiced their disdain while others who had no problem with the gift still side-eyed the pastor for the “apparent” need to show off his wealth by sharing it on social media. His wife, the proud recipient of the extravagant gift responded on Instagram by saying:

I don’t see anyone screaming about how basketball players drive what they do while you paying $$$ to see them play in arenas and on fields. We don’t live for people! We live for God!

The news of OWN’s decision comes as Gray faces two separate lawsuits, including one that is trying to evict him and his congregation from property owned by megachurch pastors Ron and Hope Carpenter. Last November, the Carpenters, co-founders of Redemption World Outreach Center in Greenville, South Carolina, served Gray and his church with a lease termination notice. Gray was given until the end of last year to leave the property after being accused of being “shady” and “dishonest” in executing an agreement with the Carpenters after they passed the reins of their Redemption Church to him in 2018, which he then renamed Relentless Church.

Additionally, Gray is facing a lawsuit from a former employee, Richard Travis Hayes, who says Gray refused to pay $75,000 that is owed to him. Hayes was reportedly never paid money owed to him after he left the church in December 2019. He claims he is owed almost $40,000 in unpaid compensation, over $12,000 in unpaid vacation time, and more than $23,000 owed in an offered salary increase in May 2018.

While it is not known what the end will be concerning the lawsuits, OWN has finalized its decision to close this chapter of “The Book of John Gray.” The pastor has assured his congregation that as an organization it will “continue to serve the Lord, reach the lost, and serve the community. This unfortunate issue will not hinder the vision, work, functionality, or heart of this church. We invite the media and the public to do their own due diligence.”

As it stands, the next chapter of “The Book of John Gray” has been canceled. However, prior seasons can still be picked up by other networks or be put into syndication.