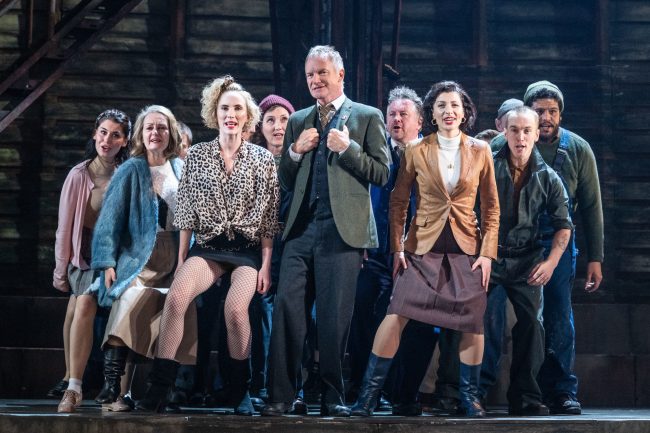 Sting developed a musical about the North East England area where he was born. It did not do well on Broadway, but he wanted a do-over. The result, version 2.0 of Sting’s “The Last Ship,” made its U.S. debut Wednesday night at the Ahmanson in Los Angeles. While some songs were catchy and Sting took a major role, his “Last Ship” barely stays afloat.

Maybe it was the northern English accents, which were hard to understand at times. Or was it the somber main storyline (a blue collar town faces the end of its shipbuilding legacy) and weak romantic sub-plot? It was definitely not the fault of the cast, some of whom shined). The show never seemed to gather steam (or set sail or another seaworthy metaphor.

Revamped since its short-lived 2014 Broadway debut, the show features a new book by its director, Lorne Campbell. This version reportedly was well received in Britain, Ireland and Canada, but something got lost in translation crossing the U.S. border.

“The Last Ship” is set in Sting’s hometown, Wallsend. While the beginning takes place in the late ‘60s, the drama is largely set in 1986. Prime Minister Margaret Thatcher’s conservatives are battling labor unions leaving shipbuilders and others grappling with industrial decline in towns with little opportunity for new livelihoods.

The romantic story is about teenaged lovers separated for 17 years. Gideon (likeable Oliver Savile) and Meg (strong-voiced Frances McNamee). Gideon returns during the turmoil over the potential demise of the shipyard. His father died and he is reckons its time “to put down roots and walk … in his old man’s boots.” Meg runs a bar and other businesses in town while raising the child Gideon did not know she was carrying when he left.  Accordingly, he seems surprised that the jilted Meg is unenthusiastic about his turn and sings about having “17 years to figure out what you want to say to someone…”

What about Sting? He portrays Jackie White, the shipyard foreman whose livelihood has ruined his health. His leadership is needed, but Jackie is not really up to the challenge. Curiously, Sting recites lyrics rather than singing a lot of time, but then his voice probably cannot compete with some of the musical theater powerhouses around him. Anyone expecting a “Sting concert” will be disappointed even though some of the songs have appeared on previous albums. Sting’s singing is mostly as part of an ensemble.

The audience clearly wanted to like the show and Sting’s effort. However, this ambitious reworking could still use more effort. It moves slower than a big ship. The songs don’t really propel the story. The choreography, like the accents, was hard to fathom and seems to cross genres and borders.

One would have expected the music, dancing or story to be the best part of a musical. But, one bright star that stood out was the set design by Designer59 Productions. Using projections the main part of the stage kept transforming from the shipyard, to the interior of a partially built ship, to a tenement, to a bar, etc. Above, the skyline varied from chimneys to drifting clouds to a ship being launched. The visuals were the most impressive part.

Relaunching “The Last Ship” is ripe for puns. However, the bottom line is that this show, like the shipyard, is not going to stay around for long. Sting’s effort and acting will be In L.A. at the Ahmanson until Feb 16. The show will then move to San Francisco; Washington, DC; and other cities before being mothballed

Photo by Matthew Murphy of Sting (center) and the cast in “The Last Ship. ”.