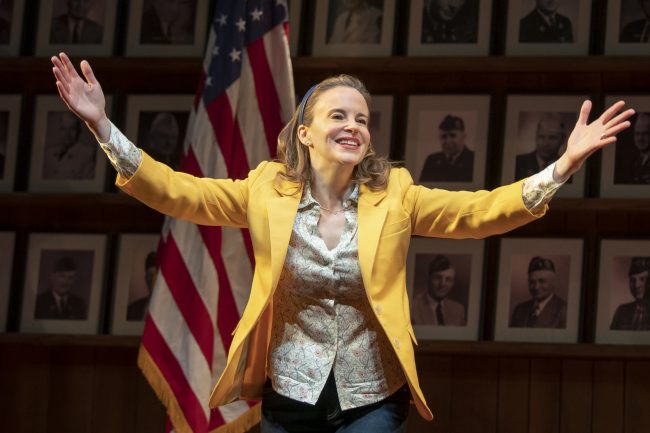 A play that explores the U.S. Constitution’s content and ambiguities may sound like a dull evening. However, Heidi Schreck’s engaging “What the Constitution Means to Me,” which opened Friday at the Mark Taper Forum in Los Angeles, offers an entertaining, thought-provoking production that forces the audience to think about the document and its meaning to each of them. The 2019 play in especially timely as the founding fathers’ words and intentions are hot topics today with the impending impeachment trial.

The Relevance of an Old Document

Tony-nominated for Best Play and a Pulitzer Prize finalist, the play starts out with the lead relating her experiences as a 15-year-old delivering speeches at various American Legion halls to earn scholarship money. The lead actress transforms herself into a high-school girl with raging hormones and a crush on “Dirty Dancing”-era Patrick Swayze. Speaking as an adolescent, she weighs comparisons of the Constitution to a quilt or a crucible.

Eventually, the tone changes. The character delves into family stories and famous cases (such as the Dred Scott decision) illustrating that the Constitution has not always – and still does not – protect rights of minorities and women. At one point Shreck’s character asks the audience, “How many of you a white male property owners?” A lot of hands shoot up, She then points out to the majority of attendees that the Constitution was only written for them. Even the amendments are not inclusionary; the 15th gives the right to vote regardless of race, color or having been a slave provided one was not a Native American or female. The oration then addresses her family’s history of abuse and other cases where male-dominated courts and law enforcement did not protect rights. The content expands one’s understanding of the current fight for equality, reproductive rights and how immigration is dealt with by the current administration. Taped recordings of court cases add legitimacy to the content.

Finally, there is a staged debate between Schreck and a real 15-year-old high-school orator on whether the Constitution is still relevant or should be changed. Overall, the 100-minute show relates how the 230-plus-year-old document affects all of us. 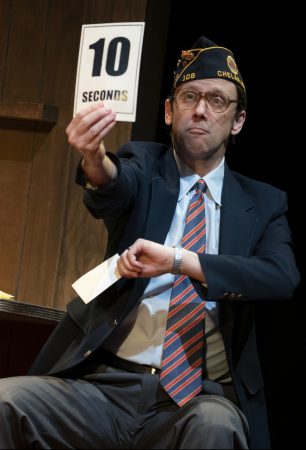 In New York, Schreck played herself. For the L.A. engagement, Maria Dizzia stepped in. She opened with, “Hi, I’m Heidi,” eliciting laughter from those who realize she is portraying the author.

Reprising his role in the show on Broadway, Mike Iveson joins Dizzia onstage as a nerdy American Legion proctor, He runs the debate and delivers questions about amendments. When the play begins examining equal protection, Iveson’s character relates that the Constitution has not always protected him – a white male – because of his sexuality.

Rounding out the cast as the teen orator and debater, Rosdely Ciprian, who was in the New York production too. Jocelyn Shek, a 14-year-old Angelino, performs the role at some performances. The charming Ciprian effectively debates the Constitution’s merit today and answers questions posed by the audience.

The thought-provoking “What the Constitution Means to Me” is playing at the Mark Taper Forum in Los Angeles through Feb. 28, 2020. It then begins a Chicago engagement on March 4.

Photo by Joan Marcus of Maria Dizzia (above) and Mike Iveson (right) in the national tour of “What the Constitution Means to Me,” courtesy  Center Theatre Group.