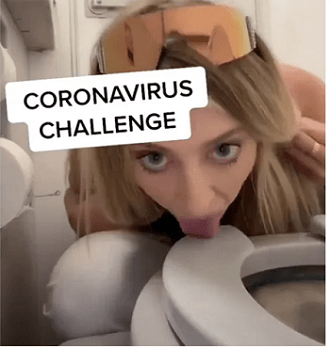 The disgusting new challenge was started by a woman who filmed herself in a plane toilet licking the seat as part of a “coronavirus challenge.” The 22-year-old posted a video of herself on TikTok licking an airplane toilet seat with the caption, “Please [retweet] this so people can know how to properly be sanitary on the airplane.” Needless to say, the video has gone viral. Although the reaction was mostly negative, there were still a few copycats.

The “Skinny Legend Anthem” singer first gained fame after appearing on “The Dr. Phil Show” twice telling her “not too hot” tale about how she used to be overweight and bullied but is now a “magical creature.” In the video, she sports long pink nails and she is careful to pull back her bleached blonde hair to make sure it does not go near the toilet or worse, fall in. Ava Louise’s shiny golden sleep mask, positioned like a pair of sunglasses, remained firmly on her head as she went in for the lick. The lick itself lasts for only a second. Then, she raises her head quickly as her perfectly manicured fingers form the victory sign.

Digital culture has evidently transformed how we all live our day-to-day lives. In particular, there has been a constant stream of viral challenges, trends, videos, and memes that have hit social media platforms across the globe. Viral content is now big a part of today’s culture. One of the biggest appeals to these trends is the reaction of the person participating in the challenge. Whether it is the sudden shock of cold water from the Ice Bucket Challenge or the intrigue of the viral Coronavirus Challenge, these crazes nearly always perform better when there is a clear emotion that is triggered in the participant.

Prior to the mid-2000s, online video was tough to use, with minimal streaming options. Today, more millennials exclusively stream video content through platforms like YouTube, Instagram, and Snapchat than those that watch traditional TV. Since 2005, this has led to the rise in viral challenges, where participants are able to upload videos of themselves doing the challenge. 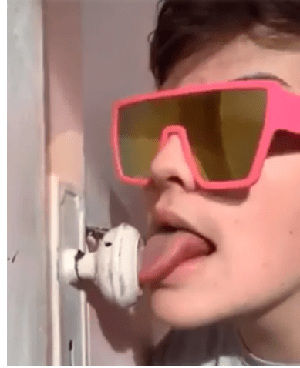 Online video has a two-fold impact on the spread of viral content. It provides a platform for people to view the challenge while also allowing participants to show others their own attempts. Challenges are almost exclusively spread through video, like with the popular Mannequin Challenge. Once the online video platform became more accessible, more and more users participated in challenges.

Louise is competing with a disease that has garnered its attention, and most certainly its clout, for spreading exponentially across the world, infecting more than 181,000 people and killing 7,100, prompting lockdowns in multiple countries causing President Trump to declare a national emergency, urging Americans not to gather in numbers greater than 10, and to stay inside as much as possible for the next 15 days. When speaking of the challenge, she said:

I’m tired of some b—- named corona getting more publicity than ME. Hot blondes can recover from anything, so “no harm done. I just wanted more attention than this corona b–ch but she’s GOOD. So I capitalized off her. And now I’m like global news. My mom told me she’s proud of me I shed light on the pandemic while wearing Fendi sunglasses.

Well, her attention-seeking efforts did indeed yield the desired results: She was featured on “CNN” and has already made $4,000. Her brazen act has even inspired other people to follow suit. In another video, a second girl takes on the challenge and she actually gave the seat two long luxurious licks. The caption on her video read:

Licking the toilet seat because I’m gross like that.

In November 2018, the Canadian Broadcasting Corporation (CBC) conducted tests on 18 flights with the airlines Air Canada, WestJet, and Porter between Ottawa and Montreal. Swab tests found the dirtiest places are headrests, testing positive for Staphylococcus, E. coli, and Hemolytic bacteria. Seat pockets were a close second with high numbers of aerobic bacteria, mold, coliforms, and E. coli. However, even if she does not get coronavirus from the challenge, it is still a disgusting act that should be avoided.

Insider: The gross reason why you shouldn’t use the seat pockets on a plane, according to a flight attendant
Miami Herald: Model who licked toilet seat in coronavirus challenge is ‘unbothered’ by outrage
TikTok: @avalouiise