Marijuana is Safe; The Drug War is Deadly 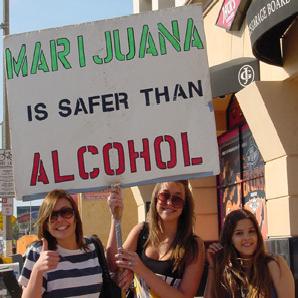 Drug abuse is bad. The drug war is exponentially worse.

Our grossly failed drug war is much more dangerous and deadly than the drugs. It kills far more people, including kids and teens, and we now have 25,000 drug gangs in the U.S. Their death rate is five times higher than Texas’ death row!

Furthermore, “You can get over an addiction, but you can never get over a conviction.” This is the slogan of LEAP, Law Enforcement Against Prohibition, a group of 15,000 current and retired police, sheriffs, DEA agents and other
law enforcement people who realize that the drug war kills more people and destroys more lives by far than drugs.

Aren’t we tired of the same old government lies that marijuana is addictive when it’s absolutely not addictive? It is overwhelmingly the safest recreational, over-the-counter or prescription drug in history. There’s never been a single documented death from marijuana alone, but we lose 2,000 college students yearly from alcohol because we won’t let them party with pot.

And then there’s the other famous government lie, that marijuana is a “gateway” to other addictive drugs. Three independent studies by the British government, the World Health Organization of the U.N. and the prestigious Institute of Medicine in the US have all proven and agreed that weed is not a gateway. What is the gateway is the dealer who wants to get his customers addicted to something stronger so he can sell to them daily instead of weekly or monthly.

The drug war kills ten to fourteen thousand teens and adults in the U.S. annually, but it’s always a few each week in NYC, Baltimore or Detroit, and it’s overwhelmingly minorities, so it’s on page 8 or page 14 in the paper and very few pay attention. At least four thousand black teens and young adults are killed annually, and no one pays attention. Trayvon Martin gets full media attention for weeks, and perhaps he should, but isn’t it time to count EVERY African-American death? Not only that but our drug war has killed 50,000 Mexicans in the last five years, and that country is on the verge of being a failed state.

Our calamitous drug policy is a complete and total failure in every conceivable way. It needs to be changed now. The only way to end it is to tax and control all drugs as the Netherlands have done with huge success for 37 years and Portugal with surprising success for nine years.

5 Responses to "Marijuana is Safe; The Drug War is Deadly"