Rage Against the Machine: No Love Lost for GOP VP Candidate Paul Ryan 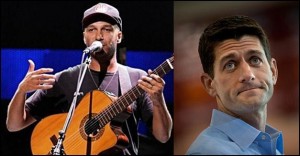 The admiration extended towards Rage Against the Machine and their musical stylings by GOP VP candidate Paul Ryan of Wisconsin is a one way street, evidently.

Ryan, a 7 term Congressman from Wisconsin, revealed last Saturday that Rage Against the Machine is one of his favorite bands. This was an all too obvious attempt at assimilation into the political mindset of the Youth of America.

Ryan’s political leanings, when merged with Mitt Romney’s, creates a witches brew of ultra far right, capitalism first at all costs, screw the poor folks agenda that is the complete antithesis of the music that Rage Against the Machine is famous for. 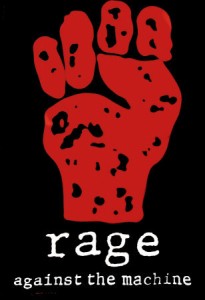 Just goes to show you that these guys (Republicans) really don’t get it, never researching things completely because they are in essence, trying to pull a fast one on the general population, like Romney’s statement that he is the best candidate for the “average guy”. WHAT? Now Ryan chimes in. Birds of a feather.

Maybe once Ryan gets his foot out of his mouth, he will try to make generalized statements that are not incongruent with actual facts.

Tom Morello, Rage Against the Machine’s frontman and lead guitarist, revealed in an exclusive op-ed piece in Rolling Stone that Ryan’s claims that he likes Rage’s sound, but not the lyrics, are contradictory with Rage’s liberal leanings. “Well, I don’t care for Paul Ryan’s sound or his lyrics. He can like whatever bands he wants, but his guiding vision of shifting revenue more radically to the one percent is antithetical to the message of Rage.“

Morello continued, “I wonder what Ryan’s favorite Rage song is? Is it the one where we condemn the genocide of Native Americans? The one lambasting American imperialism? Our cover of “F__k the Police”? Or is it the one where we call on the people to seize the means of production? So many excellent choices to jam out to at Young Republican meetings!” Antithetical indeed.

“You see, the super rich must rationalize having more than they could ever spend while millions of children in the U.S. go to bed hungry every night. So, when they look themselves in the mirror, they convince themselves that “Those people are undeserving. They’re . . . lesser.” Some of these guys on the extreme right are more cynical than Paul Ryan, but he seems to really believe in this stuff. This unbridled rage against those who have the least is a cornerstone of the Romney-Ryan ticket.”

Now I see why Mitt Romney picked Paul Ryan as his running mate, evidently they share a brain. One half wit plus another half wit = the whole GOP Presidential ticket, only half  heartedly trying to win your vote America. And when you see thru one charade, they will barrage you with the next assault on your intelligence.

6 Responses to "Rage Against the Machine: No Love Lost for GOP VP Candidate Paul Ryan"