By DiMarkco Chandler on December 12, 20123 Comments

Another Reason Why They Should Not Be Involved 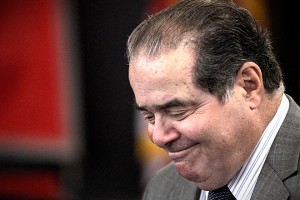 I have written before that I think it is a bad idea for the Supreme Court to get involved in the issue of same-sex marriage. After public comments by Associate Justice Antonin Scalia, I believe he, and possibly others on the Court, will place their personal beliefs ahead of what is legal, and simply the right thing to do.

Speaking at Princeton on Monday, he restated his affirmation of previous writings linking bans on homosexual sodomy to bans on sex with animals and murder. He claimed his arguments were effective when allowing state legislatures to ban acts they considered immoral.

He was stating in advance his stand on the issue. He said: “If we cannot have moral feelings against homosexuality, can we have it against murder, can we have it against these other things?” “Many Americans do not want persons who openly engage in homosexual conduct as partners in their business, as scoutmasters for their children, as teachers in their children’s schools, or as boarders in their home,” Scalia wrote. “They view this as protecting themselves and their families from a lifestyle that they believe to be immoral and destructive.”

Scalia has historically and openly supported the extreme conservative philosophy of the religious right. He has proven himself not to be a valid member of the Nation’s Highest Court whose only function is to make un-biased decisions in regards to the Constitutionality of law.

We know now that when the decision that will affect same-sex marriage is delivered in June, that there is at least one Justice who has already made up his mind as to which way he will vote. He’ll vote in favor of homophobia.