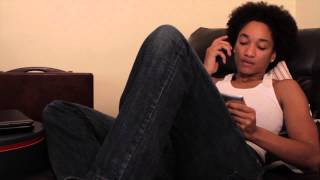 Since Showtime’s hit show THE L WORD went off the air, it left a big empty space among Lesbian shows. Though, there are many airing on the web one can wonder will a lesbian show ever get another chance on network TV. Since the hit show Hollywood has failed to green light another lesbian show even with the success that THE L WORD brought.

Still, today filmmakers are not letting Hollywood stop them from creating their own shows. Filmmakers such as Coquie Hughes and Sheri Johnson who are going forth and creating their own lesbian drama web series. They are giving voice to those that are rarely seen in Hollywood, Black Lesbians.

Take for instance the web series STUDVILLE TV, a series about four stud friends living in Atlanta. All of whom have good, professional careers, married, single and for some raising a family but the twist is that it is all from a stud’s point of view. STUDVILLE TV is the first of it’s kind as it brings studs together to tell their story. Letting people in to see what and how studs operate with their friends, family and dating.

In STUDVILLE TV the four friends are Channing (Toni Fields,) Shaneen (Champ,) Riley (Shawn Taylor) and Anise (Faurice Bobby Harley.) The four friends are very close and tell each other everything even treating their friendship like it is a brotherhood.

Channing who is protrayed by Toni Fields also mirrors the life of the creator, executive producer and co-writer Sheri Johnson. Channing is the hopeless romantic of the group who lives with her stay at home girlfriend and has also taken in her girlfriend’s kids.