Miley Cyrus Be Careful Kids, We All Know Who Hannah Montana Grew Up to Be 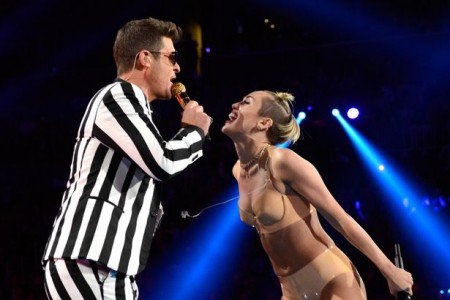 It is a cautionary tale we present to you today. One that mothers will be whispering to their children at night. All about how there really is no boogeyman or creature living under the bed. Instead, mothers everywhere will tell of the frightening transformation of one Disney Princess, Miley Cyrus. Their story will be delivered like all such cautionary tales and the final line will be, “Be Careful kids, we all know who Hannah Montana grew up to be.”

Who would have thought that such a Jekyl and Hyde transformation would have been the end result of the 2006 debut of an “average teen girl” who had a secret identity as a pop star. This duality meant that Hannah Montana, the pop princess of the Disney story, had to do a “Superman” and live her days as the mild mannered Miley Stewart when she wasn’t on stage.

The idea behind the show was that Miley/Hannah would have all sorts of escapades where her secret came into contact with her real life and the comedy ensued.

The made-for-the-Disney-Channel show was an instant hit with both children, who idolised the young Miley Cyrus as the “secret” popstar and with Mom’s the world over who dreamt of their young teen girls emulating the cheerful, talented, and wonderful character on the show.

But real life has a habit of breaking into the make believe world and creating havoc. Teen girls get older and begin to rebel against the role that they’ve been given. Miley rebelled, like millions of other girls and struck out against the Disney facade and wanted to shed the squeaky clean image that had been foisted upon her by the Disney empire.

The first signs of her rebellion were when she did a pole dance at the 2009 Teen Choice Awards, as part of her live performance of Party in the U.S.A. The media went wild and mother’s across the globe hid their impressionable children’s eyes from Miley’s apparent sexual activity on the stage.

But that was only the beginning; Miley was still, in 2009, contractually bound to the Disney program so her initial rebellion against the image she’d been lumbered with had to stay small. Once the media storm had died down, the TV show and Miley continued until the show’s season finale in 2011.

Free from the bonds of Hannah Montana, Miley set out to destroy any vestiges of the Disney poppet she’d been forced to portray for ‘G’ rated audiences everywhere. Like other child actors before her, she struggled to break free from the restrictions of childhood and move into the more grownup world of rock music.

It is a story we’ve seen before. Miley Cyrus is not the only teenager who wanted to break away from their television characters of childhood. Few though, have been as driven as Miley. Her breaking away has been frightening in its intensity. Mother’s really will be telling their kids, be careful; you know who Hannah Montana grew up to be.

Like David Cassidy in the 1970s, she wanted to do her music and have the freedom to dump the Montana falseness as quickly as possible. She accomplished this by wearing as few clothes as legally possible at photo shoots. Going au naturel as soon as she could and singing songs that referenced things like drug taking, sex and partying.

Each new song by Miley stretched the bounds until the connection between her and the childish Miley Stewart/Hannah Montana were broken and left lying in the dust. Cyrus didn’t just kill off her childish alter-ego she stomped her into a bloody mess until no one could recognise her previous incarnation.

Her rise in popularity with like-minded teens led her to do ever more questionable acts. Her latest video, We Can’t Stop explored drugs, again; partying, again and sex. The sex this time was of a more experimental nature hinting that “doing the dirty” with anyone regardless of gender was a cool thing.

She also introduced twerking into the video. This latest addition seems to be on par with her fascination with sticking her tongue out and licking anything that is about. Dolls, people; the air, all are targets of that tongue.

When she joined Robin Thicke for his rendition of Blurred Lines, she forgot all about dancing or displaying rhythm, she opted to rub her crotch with the giant foam “finger-pointing” hand she was wearing or “twerked” on Thicke’s crotch.

As Fox and Friends pointed out, one viewer wrote to them and said, “Thanks Miley, for making me explain to my 11 year-old girl why she cannot follow you anymore.” But more telling was the Will Smith family reaction to Miley’s act of raunchiness that would not have been out of place on one of Holland’s Banana Bar stages.

By the end of the evening and into the next day, everyone has been talking about Miley Cyrus and her outlandish sexual hijinks on the stage. Mother’s the world over will be relating this cautionary tale of what happened to Hannah Montana when the series ended. Be careful kids, we all know who Hannah Montana grew up to be.

6 Responses to "Miley Cyrus Be Careful Kids, We All Know Who Hannah Montana Grew Up to Be"