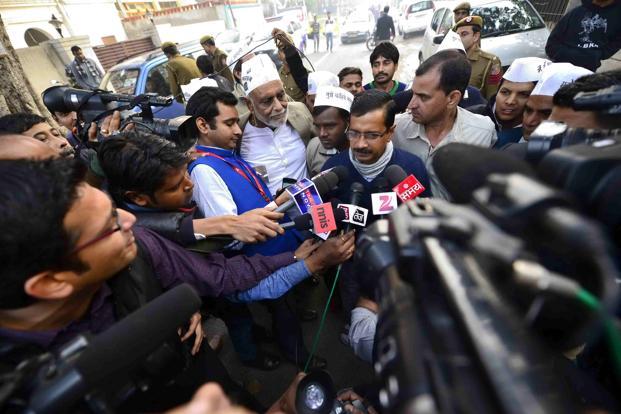 Historic election results in New Delhi unfolded with a bang. It has left many a political analyst dumbstruck. The nascent political party of India, Aam Aadmi Party (AAP) has struck the chord and won 28 seats of the electoral arena which is definitely a big score. It is crucial to mention here that even the most experienced political analyst did not predict this kind of an unprecedented result. Be it the BJP, Congress, or the left parties, the winning of Arvind Kejriwal over the presiding chief minister of Delhi, Sheila Dikshit has send ripples around of blocks in the state. Arvind Kejriwal established the AAP last year and led the civil movement against corruption under the leadership of Anna Hazare. He defeated Sheila Dixit by more than 22,000 votes to secure the most eligible person to become the chief minister but it is the BJP who ultimately secured more seats than the Aam Aadmi Party. BJP leader Arun Jaitley commented, “In Delhi, we have emerged as the largest party. We will explore what can be done in Delhi after final results are declared.”

The Seat distribution of the parties looks very well balanced between AAP and BJP, as given below:
BJP: 32 seats
AAP : 28 seats
Congress: 8 seats.
Other: 2 seats

It is interesting to note that almost 65.50 percent of the voters came out to exercise their franchise. In a personal interview, Arvind Kejriwal mentioned that it is the sheer frustration of common people against corruption which led to this extraordinary poll result in favor of Aam Aadmi Party as the New Delhi elections unfolded. Having said that, he also mentioned that the common people have given their mandate in favor of AAP and that only the common man from different strata of life has won. The overall situation and anger helped the Aam Aadmi Party to score big number in terms of legislative seats in New Delhi.

Surendar Singh, a former Commando in the Indian Army defeated Karan Singh of BJP by a considerable margin. Surendar was a member of the commando group that rescued many a persons during the terrorist attack on November 26,2008. He was given a hero’s felicitation when the news broke out and people started to pour in to congratulate Surendar. Congress leader, Rahul Gandhi commented, “The AAP has involved a lot of people, which traditional parties did not. We will learn from that.” Hence the overall picture has become very clear now as BJP is most probably going to form the next government in New Delhi.

Other AAP leaders like Kiran Bedi, Prashant Bhushan, and Bandana Kumari has expressed their emotions and congratulated the people of Delhi saying that it is a victory of the people and a lesson for the corrupt government. Political commentators are of the opinion that BJP will form the government in the state but the road to coalition government is still ongoing, especially when the BJP leaders are not saying much about this issue to the reporters. 36 is the majority seat number to form the government and since BJP does not have that, it is going to make the equations very spicy. On the other hand, Anna Hazare, the veteran Gandhian has congratulated the AAP and instructed them not to form any coalition government. He also clarified that he will continue his agitation in Ralegan Siddha, his hometown for the passage of Lokpal Bill. Although the Aam Aadmi Party securing 28 seats is considered quite a big score in the New Delhi elections, there are a lot of equations to be calculated before a government is actually formed in the state.