Football Helmet Would Protect Humpty Dumpty Some of the Time 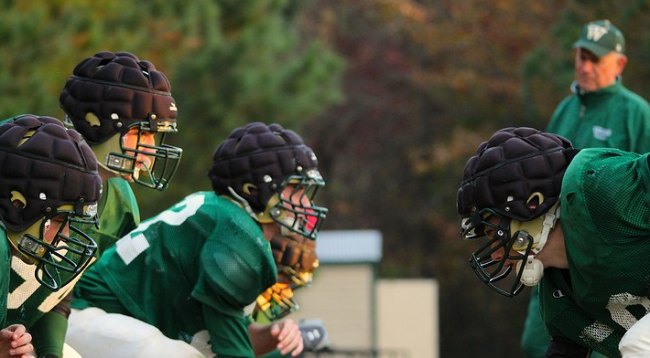 If Humpty Dumpty had been wearing a football helmet, all the king’s horses and all the king’s men would have been able to protect his head only some of the time. A helmet might have provided protection, depending on the type of head injury Dumpty sustained. A study being presented to the American Academy of Neurology (AAN) tested 10 types of football helmets to measure the kinds of forces most likely to cause concussion.

Current research indicates that football helmets are designed to protect against skull fractures and brain contusions. So if Dumpty was wearing a helmet designed to meet current NFL standards, he could have nevertheless sustained a concussion with long-term consequences. Concussions occur from what are known as “rotational acceleration” forces, i.e., the torquing and twisting that occur when the brain is knocked both front to back and side to side inside the skull.

Dr. Francis X. Conidi, in a study conducted in collaboration with John Lloyd of Brains Inc., a research and development company, located in San Antonio, Florida, has concluded that all 10 of the football helmets they tested scored terribly for protection against concussion. Conidi, vice chairman of AAN’s sports neurology section, will present his and Lloyd’s findings at the AAN annual meeting in April.

A study done by Stefan M. Duma, head of Virginia Tech-Wake Forest University’s School of Biomedical Engineering and Sciences, believes that some football helmets provide more protection than others when it comes to concussions. Duma and his team of researchers tested various brands of helmets in acceleration laboratories, and also analyzed concussion rates for helmets used by college football teams.

Even the latest model football helmet would protect Humpty Dumpty only some of the time. However, if he played football in high school, Dumpty’s brain would have been even more likely to suffer. Studies have determined that high school players are nearly twice as likely to sustain concussions as college football players.

Many former NFL players who have experienced head trauma during their careers complain of a range of neurological disorders, such as suicidal impulses, Alzheimer’s disease, depression, and a neurodegenerative condition known as chronic traumatic encephalopathy (CTE). One of the youngest players to develop CTE was Eric Pelly, a high school athlete who was diagnosed at age 18. Another CTE victim was college football player Owen Thomas, who was only 21 when he committed suicide.
A survey conducted by Marist College Institute for Public Opinion indicates most people in the United States are informed of the connection between long-term brain damage and football, and because of this approximately one-third are less inclined to let a son play football.

Unfortunately, most young athletes are more devoted to their teams and winning than to protecting their long-term brain health. Rather than let down their teammates, parents and coaches, high school and college players are less inclined to report concussions, and more inclined to “play through” a head injury.

Helmets’ poor performance in tests for concussion protection, according to Conidi, suggests that a football culture is needed that emphasizes safety. Such a culture would include tackling techniques that reduce the risk of concussion. Another measure that could lessen the twisting and jostling that causes concussion would be for young athletes to do like professional players, and train to strengthen their neck and shoulder muscles. Additionally, existing rules against head-first contact, says Conidi, should be enforced.

If Humpty Dumpty had worn the best football helmet on the market, his long-term brain health would only be protected some of the time from the kinds of damage associated with concussions. Until better helmets are developed, all the king’s coaches and all the king’s players should take the steps necessary to mitigate the incidence of concussion.