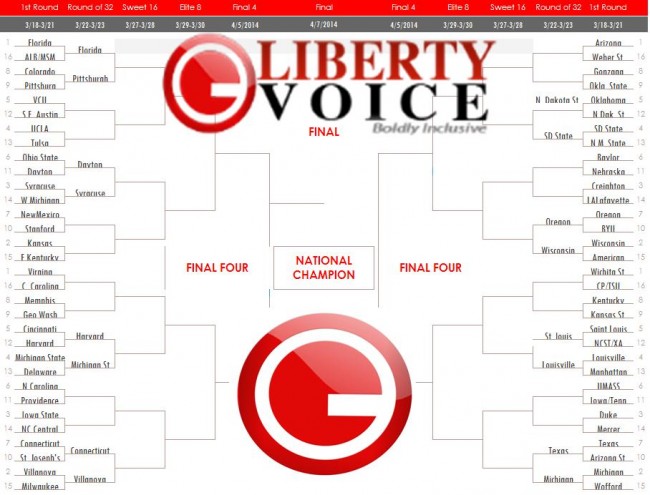 After day three of the tournament a lot of brackets have taken hits. See how the team at Guardian Liberty-Voice compares with your own bracket, and remember to give your favorite a shout on twitter with the hashtag #MarchmadnessGLVChallenge.

Mr. Olson, our current NCAA Guru, is abroad sharing his expertise with those sports fans who are less fortunate than him.  His bracket had his ups and downs, but if he were here, he’d tell you he is a genius.  We might tell you something different, but it is not nice to pick on someone who is not here.

Hmm, something has gone wrong here. This is not my bracket!? My editor Chris Chisam has obviously tampered with my picks. Yes, that had to be it. He does not have my North Dakota State pick or my Dayton upset of Ohio State. I protest! My bracket should show me as undefeated. All kidding aside, I wish I had picked Dayton but I chickened out and went with the Buckeyes. 12 wins is not bad though. Better than I usually do. Which has me very worried about tomorrow.

Surprisingly, I did pretty good considering I used a coin flip to decide every single game. I only missed the Harvard and Pittsburgh game. So flipping a coin in 11 games can result in a person winning 9 of them. Take that, everyone who has some kind of system!

Go North Dakota State and Pittsburgh for making me look good! My bracket has taken a couple hits on this first day, as I’m sure many of yours also have. Two teams I picked have fallen, but I have many left so far.

Highlights of my incorrect picks include losses by Ohio State and Cincinnati. Ballsy picks I made that held up include North Dakota State and Pittsburgh. Bring it Friday!

The NCAA Tournament began with a pretty good start for me. I am 12-4 after the first 16. I only called for one upset, North Dakota State over Oklahoma, and like many, I have been hurt by the Ohio State and Cincinnati losses. My biggest trouble spots are always the 7-10 and 8-9 games. In 7-10 games I was 2-1, but 0-1 in the 8-9 match-up. This continues to be a trouble spot in my predictions. In today’s games I have no major upsets predicted, so I am predicting a pretty solid day for myself.

Overall my bracket is still standing, but barely. Following Thursday’s Cinderella bloodbath, I escaped with a 10-6 record. My N.C. State homerism got the best of me as they fell to Atlantic 10 regular season champ St. Louis in overtime. Also, Arizona State could not hold up down the stretch and they cost me against Texas. Other than that, I did great except for falling for the evil 5-12 games. I should have known better. These games get me every year. On paper the Bearcats looked better than Harvard, and Oklahoma looked much stronger than North Dakota State. I mean come on…the Summit League?  Really? But that’s why it is March Madness. I will lick my wounds and regroup for tomorrow’scontests. 10-6 is not that bad, and so far my Final Four is still in tact, so that is all that matters.

Dayton Flyers did the unthinkable on Thursday; March 20, 2014. They upset the Ohio State Buckeyes 60 -59. This first day of the tournament has proven to be the day of Upsets. Dayton Flyers also referred to Ohio’s little brother handed them there behind today. No, it was not a blowout game but this was a nail biter. It was an understanding between the two teams that this would be a grinder. There were a total of 15 lead changes, with Ohio jumping out front to begin it all. The beauty of this whole game was though the duration of each half Dayton never lost there cool. The overt dominance of Aaron Craft did not shake there game at all. Craft had 16 points, but not the last two to make it count. This game came all the way down to the wire and Vee Sanford delivered and Craft did not.

My first day was forgettable, but not a tragedy. I missed on six games, but none of those misses were teams that I had going very deep into the NCAA tournament. My misses were Colorado, Ohio State, Cincinnati, St. Joseph’s, Oklahoma and Arizona St. There were some that a lot of people missed, and a few upsets that never came about. Probably the most embarrassing was Colorado. I refused to think that, even after going 12-12 in their last 24 games, the Buffs would not put together an inspired effort in the tournament. The biggest lesson is that momentum has a lot to do with how a team performs in the post-season. I missed on six games, but that only means that I picked 10 correctly.

The opening day of round two was rather kind with my bracket and I going 14-2, which means our friendship is still intact. Our only losses came from Ohio State and Texas. We owe it all to one weird trick for March Madness projections.

Each of our losses came from teams we had losing in round three anyway, and hopefully we can keep this charade up long enough to convince people we are smart. Please do not betray me, bracket.

An 11-5 record on the first day of the round of 64 is a respectable showing. Other than not seeing North Dakota State coming, and Oklahoma going, minimal damage to the bracket was done. The pride, after having chosen a hapless Colorado team to do anything against Pitt, is another matter. My full commentary of the day’s games can be found HERE.

Okay okay, so I am just 10-6 after the first day, and my team suggests I put a picture of a tire-fire here.   I am not discouraged, however. Three of the four picks i made to make the final four are still alive, so i have not lost hope!  Harvard and Dayton made me look like a genius, but American made me look like a fool.  Which is my real identity?  I guess only time will tell.  You will see, Coastal Carolina will make me look good today.  If they do not, maybe the tire-fire will show up tomorrow.

Keep checking back for the Guardian Liberty-Voice team’s continuous coverage of the NCAA Tournament. There are team bios, an updating tournament schedule, match-up previews and recaps, and check out how our Cinderella predictions fared.  Plus, stop by every day for an updated outlook on each of our brackets.