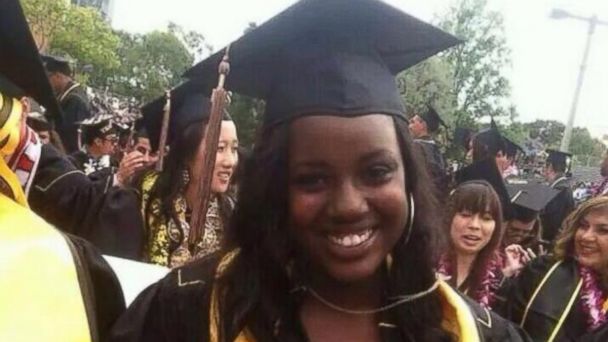 A mother breastfeeding her baby at her college graduation at California State University, in Long Beach caused a social media frenzy. Many took to Twitter, Facebook and Instagram to verbally attack the 25-year-old graduate for feeding her daughter after she walked off stage with an accounting degree in hand.

Karlesha Thurman was at her graduation ceremony with Aaliyah, her then three-month-old daughter, when she opened the top of her gown and started breastfeeding her daughter. One of her former classmates who was sitting in front of her asked if he could take a picture of her and she agreed. Karlesha had no idea that a simple picture would turn into a national and controversial conversation about breastfeeding.

At the graduation no one said anything; they all thought Aaliyah was so cute, said Karlesha. It was not until this past

weekend as she was viewing the Facebook page Black Women Do Breastfeed that she saw a post asking her to post the photo the classmate had taken of her breastfeeding. Shlonda Smith, the administrator of the page, reposted the photo and from there it went viral.

Shlonda said she also had her first child while she was a college senior and like Karlesha nursed her son while she finished her degree. Shlonda felt the picture of Karlesha and Aaliyah spoke a self-empowering message and displayed a beautiful image of natural child-rearing. She said people are only thinking about her being outside with her breast exposed, they fail to see it as breastfeeding and brain development. Shlonda said she sees it as “the gift that keeps on giving” because breastfeeding not only promotes a special bond between the mother and her child but it also lowers the risk of female cancer.

The Facebook page was the only platform Karlesha uploaded the picture to but the image quickly found its way to Twitter and Instagram as well, sparking much debate. Social media skyrocketed with women and even men calling this mother a host of profanities among other criticisms. Karlesha was shocked that something so normal would generate that much attention and stir such controversy.

This mother, who had just earned a degree in accounting, said she did not think twice about nursing her daughter in the presence of her fellow graduates. Karlesha honestly thought as a society people were more understanding of the importance of breastfeeding and accepting of it.

It is not a negative, disgusting or bad thing, it is the best thing for my daughter and more people should do it. 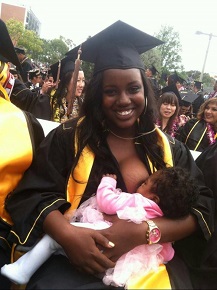 Although this college graduate has received much criticism she has also been given support. There are a lot of popular hashtags on Twitter that help to promote breastfeeding images. One of the most popular is #normalizebreastfeeding. For many supporters the frenzy the image caused is shocking because in the United States of America there are 45 states which allow women to breastfeed in public as well as private places. It is not as uncommon as social media is making it appear.

Karlesha said even with all of the stress and unexpected reactions from the image she would indeed post the image to Facebook again. This mother said she posted it to show that breastfeeding is not only normal, but natural. People nurse their children all the time. Despite the negative feedback, she knows the main reason she posted the photo and has no regrets.

When the image was captured Karlesha said she was filled with happiness and pride.

I was proud of the fact that not only did I graduate but that I got to share the moment with the one person who is the most important to me and that is my daughter.

A mother with her arms wrapped around her daughter at her college graduation caused a social media frenzy when she posted an image of her breastfeeding her baby. Karlesha Thurman had no idea that something so common would cause such controversy. Many took to Twitter, Facebook and Instagram to attack this 25-year-old graduate for feeding her daughter after she walked off stage with her accounting degree in hand.