By Cherese Jackson on September 24, 20144 Comments 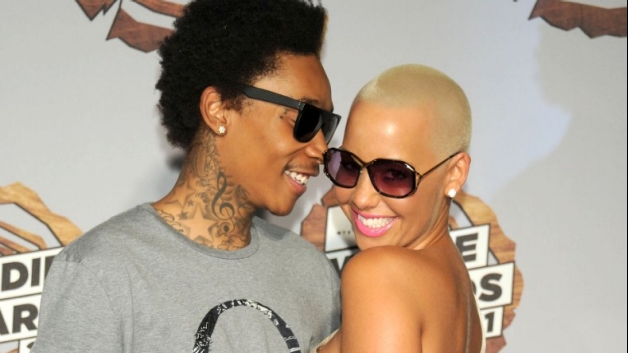 In the world of celebrity break ups there is another couple joining the ranks. Amber Rose and Wiz Khalifa are calling it quits only a year after their son Sebastian was born. According to court documents, Amber has cited the reason behind their separation as irreconcilable differences. The split was made official on September 22.

Although “irreconcilable differences” is somewhat of a generic phrase, rumors of infidelity have already began to circulate the rumor mill. The question many are asking is whether Wiz or Amber Rose is the culprit. One source reported while on tour Wiz decided after sleeping with groupies that he is ready to be single again. He loves Amber and still feels she is a “cool chick” but he needs to be single right now. Others said Amber has been spotted on multiple occasions with her new manager, Nick Cannon, and believe she is leaving her husband for Nick.

Amber is requesting full custody of Sebastian with visitation privileges for Wiz. The couple’s split has been described as bitter, however, there is a prenup that Amber has no plans to contest. The prenup already has a clause for spousal support due to their son, but sources close to the couple said the divorce is going to be messy. Amber has been fairly transparent about the many arguments the two of them endured and said she is going to hit him for the maximum amount of child support allowed.

Just a few months ago Amber stated how she had moved on from her prior love, Kanye West, and was happily married to Wiz. During an interview she spoke of how sweet he is and said this is what made her fall in love with him. People had criticized her from going from one rapper to another and Amber decided it did not matter if people called her a gold-digger because Wiz is a rapper; she did not care because he is a genuinely wonderful guy. According to Amber, he was Cameron Thomaz and not the famed rapper Wiz Khalifa that the public knows.

Reportedly, Amber has had a crush on the America’s Got Talent host for years. She was recently given a leading role in Nick Cannon’s comedy movie School Dance which hit theaters this summer. The internet has exploded with rumors of the duo hooking up and sources say they are leaning on each other during their respective relationship crisis. Only time will tell what is really going on with Amber and Nick as they both endure the rough season of divorce.

Nick and Mariah Carey have been in a relationship crisis for most of 2014. The two of them have reportedly already hired divorce lawyers and are negotiating custody agreements for their twins and property. According to Nick, he and Mariah have lived in separate residences since May 2014 and he believes their marriage had become toxic.

Amber Rose and Wiz Khalifa are the newest couple to join the ranks of celebrity break ups. The couple has decided to call it quits a year after their son was born. Amber nor Wiz have mentioned their divorce directly but both have posted encrypted messages on their respective Instagram and Twitter accounts since filing for divorce.