Police Show Different Side in a Violent Time [Video] 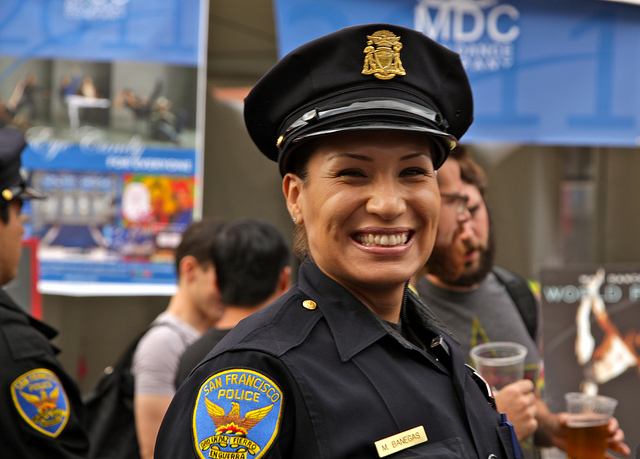 Police are attempting to show a different side of themselves in a time where they are seen as violent abusers. They are looked at as being perpetrators of undeserved acts. With all of the negative media and excessive exposure of police brutality and unjustly getting physical with people, there are a few cops out there that are doing good things to help out more than hurt the image of a group that is under the microscope daily.

A case like Ferguson, Missouri and the Michael Brown death has been the face of police brutality in America. Now everyone is racing to get a chance to record video of cops making arrests and being overly aggressive to people. Hundreds of videos are being posted all over the internet for everyone to see. The image of policemen is being more than tarnished by people claiming that their civil rights are being violated, whether they are or are not is strictly up to higher powers, but the other side of these police is not being shown as frequently. There are good cops out there that want to do more than just what they are required. Some cops feel they have a purpose to help out the people and the community around them.

A brighter side begins with the officers Alisa Martinez and Christopher Brady helping a mother deliver a baby on the side of the road. The officers pulled a car over for driving erratically. The husband and now father told the police that he was driving erratically because he wife was in labor. The officers did something amazing by assisting the wife and mother in delivering the baby before EMS arrived. The mother and child were quickly transported to the nearby hospital thanks to these great and thoughtful policemen for doing well on the streets.

A fun story that shows a different side of police in violent times comes out of Portland, Oregon.  As it goes,  two policemen helped a local pizza boy finish his delivery when he was unable to. A local pizza boy was involved in a car crash leading to neck and back injuries. Officers Michael Filbert and Royce Curtiss helped out the local pizza boy by completing his delivery. The officers delivered pies to the house of Steve Huckins, much to their surprise did they find out that the two cops at their door were there to hand over some delicious pie. Officers like these show a more fun side of the law rather than that seen on the everyday news.

A great story out of Alcoa, Tennessee shows what a city can do to help its people in the right way. The city held a Community Day in its city plaza featuring the Policemen and Firemen of the city. The day was held for Crime prevention and fire prevention week. The day was held for the community to learn more about law enforcement. There were little games for the people to play. For the fire department, there was a fire simulator that gave people a chance put out fake fires and see what it is like to be a fireman. For the police department, people got a chance to play with “beer goggles,” that show people what inebriated people see. All fun and games with the police department and fire department, little do we see of the law enforcement giving back and sharing smiles with the people. Smiles instead of screams filled a town.

The violent times involving the police have shown us a different view than what is hoped for, but these acts of kindness from around the country has shown us some good in a world of over-publicizing negative acts and under-publicizing acts of kindness and good. There are stories to be admired and viewed that have yet to be seen on prime-time television, but given the chance to be viewed brings hope in a greater good.