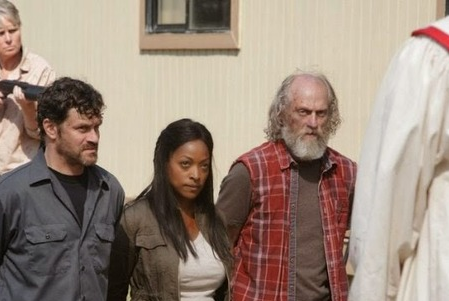 [UPDATE] Actor Keith Allan got in touch, via the comments to point out that the author of this article committed the heinous offence of spelling his name incorrectly. This has now been sorted and we pass on our apologies to Keith.

Just when it looks like Z Nation is trying to take itself a little more seriously, as in one major downer in Resurrection Blues, Keith Allan shows up smiling and apparently happy in a Nexium television commercial. Serendipity? Possibly, but it did help alleviate some of the sombre action on this week’s episode. Granted, the show still has a good time putting as many homage moments as possible in each episode but the show was pretty much a downer after its amusing open.

SyFy did make sure to give viewers a heads up by advertising that a major character would be killed off this week. For any show dealing with a zombie apocalypse, it is pretty much a given that main characters will die. Fans of the show should stop reading now as a huge spoiler will be dropped here, so if viewers set up their DVR and have not watched the show yet, go make a cup of coffee, trim your mustache or turn on that DVR.

There can be few things worse than to have your last meal be a vegetarian mish mash consisting of cherries, a peach and what looks suspiciously like a potato pancake. Even criminals can get a steak before they shuffle off their mortal coil. Not so for Garrett this week. The poor chap did not even get to finish his last meal, but even worse, Garrett does not get to finish his chance to seal his romance with Warren.

When they get the one available room, and Warren gets to do her Catholic school gag, things just start getting interesting when zombies overrun the weapon’s free complex and the poor couple never even got to “mid-coitus” before a zombie comes knocking at their door. This is the first time that either Garrett or Warren have had a chance to get romantic in Z Nation and Resurrection Blues may just be the most depressing episode of the series ever. Before moving on to Garrett’s fate, however, let us take a moment to contemplate the appearance of actor Keith Allan in that Nexium commercial.

The advert for the purple pill, which appears to offer relief for esophagitis sufferers, aired just after Allan, as Murphy, tries to get “dibs” for the room on the episode. Admittedly, unless viewers are watching the commercial on DVR, the actor could be missed. Especially as television commercials are the time most viewers take care of personal needs; getting snacks, going to the bathroom, et al. For those fans, of the show not the drug, keep an eye out for the advert and viewers will be treated to the sight of a happy “healthy” Keith Allan without his Murphy makeup.

Back to the show, the love scene between Garrett and Warren is interrupted by a religious zealot who believes that the zombies are the “newly resurrected” and part of the second coming. His followers infiltrate the complex and turn themselves. The area is surrounded by the preacher and his followers who swarm over the camp. Gathering the survivors, the man of the cloth offers them a chance to follow him or to become a newly resurrected, aka zombie.

Murphy attempts to save the day and before the preacher can shoot him, Garrett leaps to save the man with a little “bullet interruptus.” Catching the round meant for Murphy, the leader of the little group dies and turns. Warren does dispense a some mercy to her former, almost lover – they did not get a chance to really consummate their romance – and the saviour of mankind has turned enough that zombies are not attacking him.

In Z Nation Resurrection Blues, Garrett dies, Murphy turns even more and Addy, along with Mack, prove that death by mixer is messily possible. Keith Allan and the Nexium commercial is an amusing “accident.” Or is it? Did the SyFy programmers decide this was a chance too good to miss? Again, it is possible. Of course with the long list of possible “side effects” mentioned on the advertisement, did they forget to mention zombie creation? With Citizen Z pondering just what caused the zombie apocalypse, could it be that acid reflux sufferers will be responsible for the end of mankind as we know it?