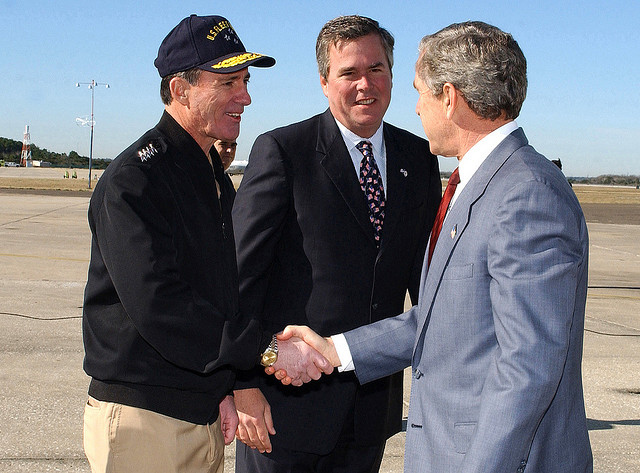 George W. Bush appeared on “Face the Nation” Sunday, Nov. 9, 2014, dropping hints that his brother Jeb is considering the possibility of continuing the family legacy with a bid to be 45th President of the United States, following in the footsteps of his father and older brother in the 2016 election. Nothing is certain yet as the younger Bush considers the ramifications of the presidency on his priorities of family and faith. The former Florida governor faces challenges regarding whether his name recognition factor will be positive or negative and whether his stands on key issues will resonate with enough voters to overcome any potential reservations raised by his opposition and the undecided. The former president vows to back his brother all the way should he decide to mount a presidential campaign in 2016.

Although, George W. Bush shared that he and his brother are very close, he said that Jeb is processing the decision privately with the effects that the presidency has on family and faith foremost in his mind. Bush told host Bob Schieffer that his younger brother need only look at his dad and older brother for hints on gauging the pressures and challenges of maintaining personal priorities while in the White House.

However, he maintains that both former Bush presidents both showed it was possible to be president and maintain commitment to family values and faith without succumbing to the pressures to compromise or sell out. He estimates the chances of a third Bush continuing the family legacy and running for the highest office in the nation in 2016 are about 50-50 at this time.

Bush recognizes that his own unpopularity in the last few years of his presidency could hurt his brother’s candidacy should he decide to run. However, he stands ready to support him in any way that he needs, whether publicly or behind the scenes. He says the country could benefit from Jeb’s optimism and vision. He endorses his brother’s abilities as a leader and ability to mount an effective appeal to different voter groups.

Questions arise about whether overfamiliarity with the Bush name or fear of dynasties could hurt the Jeb’schances in a presidential bid but the former president is partial to the idea of his brother squaring off in a presidential campaign with former First Lady and Secretary of State, Hillary Clinton. With some voters, the name could be a liability although if Hillary Clinton was on the opposite side of the ticket, concerns over the name and the dynasty potential would be neutralized, allowing voters to focus on leadership ability and the real issues. However, either one has committed to a run for the presidency at this time.

Writing for the Christian Science Monitor (CSM), Linda Feldmann noted that the Bush name does give Jeb a strong base of political and fundraising connections. Other assets include a fluency in Spanish and Columba, his Mexican-born wife that enhances his appeal to the Hispanic voters that voted for Obama in 2012. High on his list of policy positions is support for comprehensive reform in immigration, which could help in the general election although it could be a problem for conservatives in the primaries. His advocacy for school choice and stricter testing standards could be another conservative draw.

The family is divided on their feelings about a third Bush presidency. Former First Lady and family matriarch, Barbara asserts that there have been enough Bushes in the White House, while George W. is encouraging his brother to make a go of trying for a third Bush presidency in 2016. The former two-term Florida governor is playing his hand close, not dropping any hints as to his thinking process while he mulls over his decision, which he plans to make by the end of the year. CSM reports that polling averages show Mrs. Clinton leading by 10 percentage points if the election were held today. Nonetheless, within the Republican Party, he mounts a serious challenge to Sen. Rand Paul for his party’s nomination. Big brother, George W. Bush, does not know if his younger brother will make a run for a family legacy or not in 2016; however, hints about the possibility of the first-ever three-president family will certainly continue reaping the political rumors until he declares his intentions to run or withdraw.