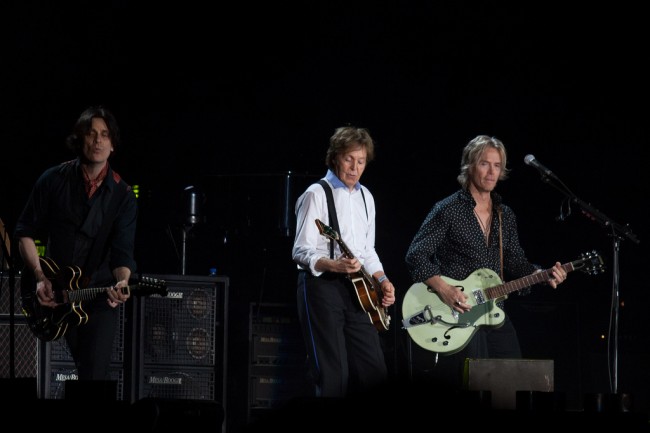 Music legend Paul McCartney recently opened up and talked about the death of his former band mate John Lennon. Lennon was shot to death on this day 34 years ago, while his wife, Yoko Ono, watched. Lennon was 40 at the time of his death. Mark David Chapman, the man convicted of having killed Lennon, had stood by Lennon’s New York City apartment waiting for the musician to make an appearance. When Lennon arrived, Chapman asked the ex-Beatle to sign his record before pulling a gun on the iconic musician and shooting him fatally in the back. A stunned world mourned the passing of one of the voices of his generation.

McCartney recalled the day that he heard the news. He was at home when the phone call came, and he was told to brace himself for some very bad news. When he heard that Lennon had been shot and killed, he could not accept that his friend was gone. It came as a huge shock, and he felt stunned that he was never going to see Lennon again. He went to the recording studio on that day and met with George Martin, the Beatles producer who was working in the studio with McCartney at the time. Everyone was in shock, and very little work was done on that day.

Paul McCartney, who used to work closely with Lennon when they were both members of The Beatles, had a surprising reaction to Lennon’s death when he appeared before the cameras on that day. Part of the reason, he said, was that he was largely unprepared for the enormity of the moment. He explained years later that he was never the kind of person that could stand before the cameras and give the kind of proper eulogy that was often expected under such circumstances. He said that he has never been good at public grief. However, McCartney’s reaction that night was seen by some as seeming particularly insensitive given the tragedy, as he simply suggested that Lennon’s shocking death was a bummer, and added little more.

The statement and reaction were interpreted by some to suggest that McCartney was not as saddened by Lennon’s death as perhaps he should have been. The two musicians had a kind of rivalry that was highly publicized, which is believed to have contributed to the breakup of The Beatles. That rivalry continued on well past the end of the Beatles, as well, and many believed that there were some hard feelings simmering underneath the surface between the two. So when McCartney responded in a manner that some interpreted as indifferent, it fueled speculation that those presumed hard feelings were going on display at a very inappropriate time.

According to a recent interview with McCartney, however, this is not the case. He said that Lennon’s killing came as a huge shock, and he calls Chapman, Lennon’s assassin, the “jerk of all jerks,” and says that Chapman had no political motivations for doing what he did. McCartney did not mean to come across as sounding almost indifferent about the tragedy, but his inability to express his sadness in a public way was not indicative of any hard feelings or indifference. Despite the well-known tensions that existed between Lennon and McCartney, they were on friendly terms at the time of Lennon’s death. He said that, at the time, they would call each other up and exchange recipes. They were on solid, friendly terms. McCartney said that it would have been a truly terrible thing had they still been on bad terms, and so he is very grateful that the two patched things up and were on friendly terms at the time that Lennon was killed.

One Response to "McCartney Discusses the Death of John Lennon"