Auschwitz on Fire, 70 Years After 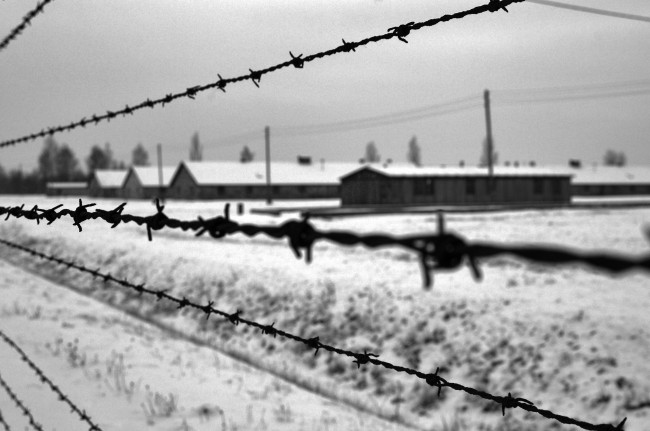 Seventy years after its liberation, Auschwitz still brings to mind the fires that intentionally and mercilessly destroyed 1.1 million lives. Over 190,000 were deported or killed outside of the camp’s borders. Located in Oświęcim, Poland, the site is the largest and most infamous complex of concentration, forced labor, and extermination camps during the Nazi era of World War II.

Between 1940 and 1945, a minimum of 1.3 million people were deported to the death camp complex by Nazi SS guards. Of these, 85 percent were brutally murdered. This day is commemorated by a ceremony at the site of the death camp. Three hundred Auschwitz survivors were expected to attend.

Children under 13 and the elderly were invariably sent to their death. Those not killed immediately were required to do forced labor in starvation conditions, unprotected from the elements of the harsh winter, disease and illness.

After the War, a search was begun for the perpetrators of the Holocaust. The International Military Tribunal (IMT) conducted war crimes trials of leading 22 German Nazi officials in 1945 and 1946. The most well-known of these was in Nuremberg, Germany. The judges represented the Allied powers.

From 1946 to 1949, the U.S. prosecuted over 175 additional persons. However, only a small percentage of criminals have ever been brought to justice.

With such a history, can any of the 7,000 survivors liberated from Auschwitz on January 27, 1945 – who are still alive today – free themselves from the pain and suffering that they experienced? What peace can there be for the survivors of the death camp?

Survivor of Auschwitz George Scott of Toronto witnessed the fires of the crematoriums and was liberated from Auschwitz 70 years ago at age 15. He, like many other Holocaust survivors, talks about his survival with mixed emotions that include never-ending gratitude and guilt that he survived through what so many others of his peers did not.

Alan Brown survived the Holocaust in forced labor camps in Hungary and Austria. Through sustained determined effort he returned to his native Miskolc after the War. He waited eight months for the return of his mother, grandparents, cousins, and friends. Tragically, he learned that they had been barbarously murdered in Auschwitz and that he was the only one to survive his entire family.

Those who can do so are turning towards efforts of healing from the horrors of the Holocaust. As the number of survivors of that era dwindles, it remains to the next generation to pass on the legacy.

The USC Shoah Foundation in California has a program which teaches that horrific time in history to educators and students through classes, tours from Warsaw to Krakow, and meeting Holocaust survivors. The Center for Holocaust and Genocide Studies (CHGS) at Salem State University in Massachusetts also has a program which brings teachers and students to places of genocide in Europe, in an effort to educate and bring healing.

A story yesterday in the Wall Street Journal brought to light how Rainer Hoess, grandson of Auschwitz SS top leader Rudolf Hoess, has struggled against the curse of his family heritage since he was a teenager. He repudiates his grandfather’s heinous acts and is an outspoken champion against extremism and neo-Nazism. Rainer Hoess attended today’s memorial service. At the edge of the death camp are the gallows where his grandfather was hanged in 1947 for his war crimes.

Today, 70 years after Auschwitz was liberated, a fire still burns metaphorically for those who perished senselessly at the hands of the brutal Nazis. The fire in the hearts of the descendants of Holocaust survivors represents the passion for carrying on their parents’ legacy. It represents the hope that life be renewed and there is joy in the future. It represents that the good of life will be victorious over evil.

Opinion by Fern Remedi-Brown, daughter of Holocaust survivor Alan Brown whose story is told in the following articles:

One Response to "Auschwitz on Fire, 70 Years After"