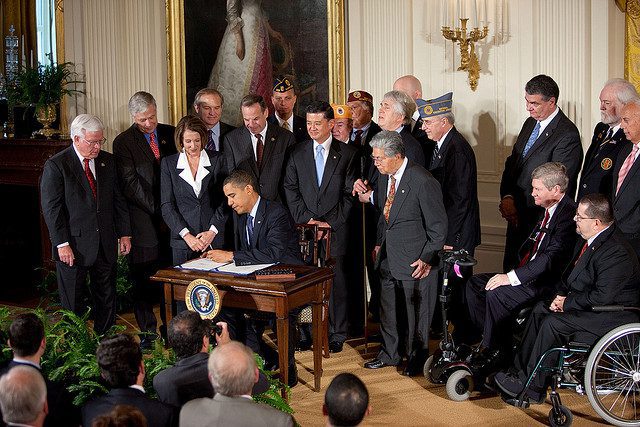 President Barack Obama’s proposed budget plan for 2015 includes $7.4 billion to go to clean energy and $4 billion to entice U.S. states to make less emissions, officials told Reuters. Most of the money will be coming from the wealthy.

The budget proposed by the president will be published later on Monday, the budget requires for the extension for the Production Tax Credit used for Wind Energy to be permanent. Also calling for the extension on the Investment Tax Credit used by the Solar Industry to be permanent. Obama has made it clear that he wants to fight climate change in his last two years in office.

The 2015 budget plan includes a $478 billion program to upgrade roads, bridges, and various transit systems for six years. The program partly financed by a 14 percent tax on overseas profits. In addition, a 19 percent tax on all foreign earnings to close the loophole that U.S. companies use to change profits to tax havens through the tax.

The plan also calls for automatic spending limits to be ended with a 7 percent increase over sequestration – spending limits, for domestic programs and national defense. The budget means that the rich will be taxed more to pay for the domestic programs. The 2015 budget plan by Obama, although not yet proposed, but leaked, was described by GOP lawmakers as “dead on arrival.”

Obama said on his weekend radio address that his budget is dedicated to the middle class. He said that the government will help working class families income stretch by paying for paid leave and child care.

Senate Majority Leader Mitch McConnell and the House Speaker John Boehner said they would block tax hikes, and oppose new spending programs. McConnell quoted Obama saying that his ideas are not partisan, instead practical. McConnell said that it seems not to be the case.

Paul Ryan, Wisconsin GOP Representative, the new chairman, told NBC’s “Meet the Press” that he wanted to work with the Obama administration to find similar ideas about aspects of the tax reform. Ryan did not approve of Obama’s budget plan for 2015.

Ryan said that he thinks that Obama is making an effort to take advantage of envy economics. In addition, the top to down redistribution which does not work, according to Ryan.

The top corporate tax rate for the profits of companies earned in the U.S. would decrease to 28 percent. Other lawmakers want to pay for increasing the Highway Trust fund with a higher gasoline tax, because gas prices are low. The president is opposed to it.

Obama does support a 75 percent increase in funding for projects such as light rail. He also wants a $38 billion increase to the Pentagon which Republicans would likely not be opposed to. The president also wants to make a fee for the 100 U.S. financial companies with assets of more than $50 billion.

Obama’s budget plan for 2015 includes taxes and others would generate $320 billion over 10 years and go to middle class tax breaks, child care, and free community college for some. The budget plan is expected to cut the deficit by as much as $1.8 trillion, from White House calculations. The deficit, Obama said, would rise from expected 2016 to b $474 billion all the way up to $687 billion by 2025.