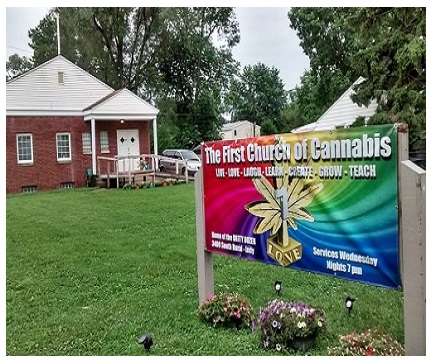 The First Church of Cannabis is not just blowing smoke, but looking to spread love, peace, and joy. The church held its first service of communion on Wednesday, July 1 in Indiana. The gathering opened to a packed house inside and out. Neighborhood protestors lined the streets along with law enforcement as the congregants inside sang, shouted and heard words of encouragement.

The service was led by Ministers of Music, Love, and Education. The Minister of Music set the sanctuary on fire with Mary Jane, by the late Rick James, as people danced in the aisles and around the pews. Mary Jane is one of James’ earliest hits as a solo artist and is one of his most notable songs. It is not an ode to a sexy woman as many once thought, but a love song to marijuana.

I’m in love with Mary Jane she’s my main thing. She makes me feel all right, she makes my heart sing. And when I’m feeling low, she comes as no surprise. Turns me on with her love, takes me to paradise.

Although the service maintained the flow of a traditional worship service, it was anything but ordinary. The one component that was missing from the cannabis church experience was marijuana. The First Church of Cannabis did not intend on blowing smoke but spreading love during the first gathering. Prior to the first service, the city’s top law enforcement officials issued a warning to the First Church of Cannabis. It stated:

Anyone who smokes marijuana at the inaugural service next week will face criminal charges.

The warning came from Police Chief Rick Hite and Prosecutor Terry Curry. Both authorities cautioned possible attendees by saying, “In addition to making arrests for anyone in possession of or in the presence of marijuana that is being used, they will also be on the lookout for impaired drivers.” Law enforcement said it could not ignore an event that has received such wide promotions across the news and social media outlets. Hite and Curry said it was upsetting knowing that they had to expend valuable manpower for this when there are many other more pressing needs for law enforcement resources.

In response to the warning, Bill Levin, founder of The First Church of Cannabis, decided to forgo smoking during the opening service. He quickly spread the word that cannabis would be prohibited in the first service due to the threats from law enforcement. He said:

The police department has waged a display of shameless misconceptions and voluntary ignorance. We will do our first service without the use of any cannabis. We will not be dragged into criminal court for their advantage. We will meet them in a civil court where the laws are clear about religious persecution. We do not start fights, we finish them! One Love!

The results of a study published in The Lancet support many of the church’s beliefs. According to results of the study, Cannabis is one of the most powerful healing plants on the planet. Other studies have allegedly made pseudoscientific attempts to indicate that people who use cannabis tend to experience psychological issues, social problems, and mental decline. However, the recent study seems to prove there is no evidence that marijuana use is directly linked with such problems. 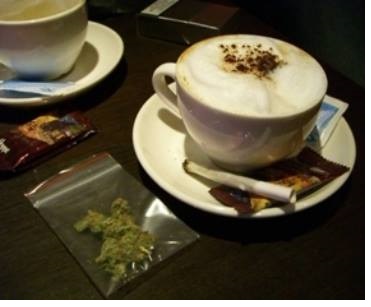 Cannabis lovers agree that no plant has been condemned more than marijuana. They believe the government has taken upon itself to designate this living organism as an illegal substance. Marijuana acts as an antioxidant, anti-inflammatory and neuroprotective agent that has reportedly been found to reduce blood pressure, treat glaucoma, suppress cancer, alleviate pain and even inhibit HIV.

Dr. Sanjay Gupta, in a documentary titled Weed, explains why he changed his mind about the plant. Initially, Gupta was adamantly against the benefits suggested with cannabis, but he has since apologized. The CNN chief medical correspondent said the medical world in the United States has been terribly and systematically misled for nearly 70 years. Gupta wrote an article and produced a documentary in hopes of setting the record straight about the healing plant so many rejected.

The First Church of Cannabis made its debut on Wednesday, July 1, 2015. Dozens of officers were positioned outside as members inside celebrated the joys of marijuana and easy living. The church service was held without any use of the illegal drug in order to avoid unnecessary interactions with law enforcement. Bill Levin and the congregants are praying that those who reject the benefits of marijuana and have waged a war against their assembly will replace the hate in their hearts with love, peace, and understanding.

All Images Courtesy of The First Church of Cannabis