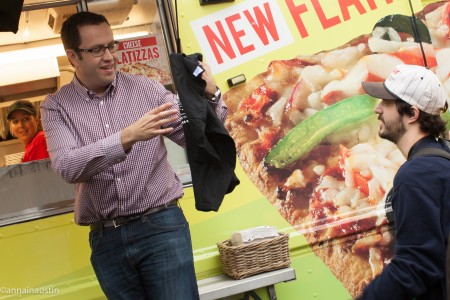 On Tuesday, a statement was released by fast-food sandwich giant Subway, which stated the company and its infamous spokesperson, Jared Fogle, have, “mutually agreed to suspend their relationship,” after a raid was conducted by the FBI on Fogle’s Zionsville, Indiana, home early this morning. Federal officers were stationed at the house to serve warrants in connection with a child pornography investigation.

The raid began Tuesday morning after federal authorities arrived with state and local police at Fogle’s house around 6:30 a.m. FBI agents were reported to have been seen removing items from the house, including computers and DVDs. A mobile forensics lab was parked in the driveway of Fogle’s house on Woods Edge Drive to collect and analyze possible evidence.

Fogle was also seen being taken in and out of the mobile lab throughout the day, then escorted back into his home. There are no reports regarding if he has been arrested.

A few months ago, former Jared Foundation director Russell Taylor was taken into custody on charges related to a child pornography case. It is currently unclear whether the Subway spokesman has ties to the case, or if the morning’s incident was related.