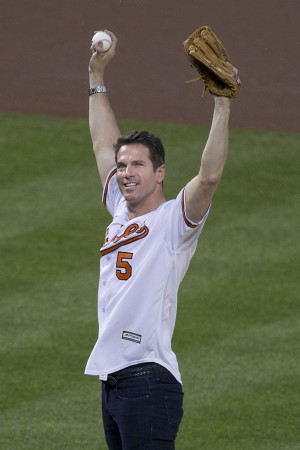 On Saturday, July 18, Thomas Roberts made gay rights history when he became the new anchor for NBC’s Saturday edition of NBC Nightly News. Roberts is the first gay man to anchor the evening news on any of the major television networks and he was honored to do so.

Roberts’ lead story of the night was Donald Trump and his controversial insults toward Arizona senator John McCain, as well as his war record. It was a contentious news story. However, he was able to get through the 30-minute newscast with ease and confidence, said The Advocate, who added that his experience as an anchor and as a journalist was apparent.

In March, Roberts was questioned about the possibility of becoming the anchor for NBC’s Nightly News.. The anchor position that has been well-recognized as the chair where Lester Holt and Tom Brokaw all sat while they became news anchor legends, according to the number of awards they have each received. He said he was still waiting on the call. Then, he added, “It would be historic, and I am willing and able…” According to Opus News, the assumption is that he will be the weekend fill-in anchor and then be called upon to step in when Holt is not available.

He has been well-recognized for his abilities as a journalist, an LGBTQ advocate, and host. He was presented with the Edward R. Murrow Award in 2001, and in 2002, he was nominated for an Emmy. He has also been recognized as an LGBT advocate by the Human Rights Campaign, Marriage Equality USA, The Stonewall Community Foundation, and the National Crime Victim Bar Association.

Roberts was going to co-host the Miss USA Pageant, however, he opted to drop out of the pageant due to Trump’s negative remarks about Mexican immigrants. This was a personal choice; not one of political value, he said to Out. This is due to the fact that Trump is co-owner of the Miss USA Pageant. Roberts did not want people to think he condoned Trump’s comments.

He keeps busy as the host of MSNBC Live With Thomas Roberts and he is the anchor for OutThere, which is a weekly program on MSNBC’s Shift website, a platform which is used to discuss issues that affect the LGBTQ community. He has hosted and co-hosted multiple programs on broadcast and cable television, such as Entertainment Tonight, CNN Headline News, NBC’s First Look, and Way Too Early. He has also co-hosted the Miss Universe Pageant.

There have been other news personalities who have been open about their homosexuality, including Rachel Maddow from MSNBC and CNN’s host of AC360, Anderson Cooper, who has also reported for 60 Minutes. Also openly gay is the host of CNN Tonight, Don Lemon, and Sam Champion, as well as Robin Roberts from Good Morning America. However, Thomas Roberts is the first gay news anchor for NBC Nightly News, which airs on one of the big broadcast networks.