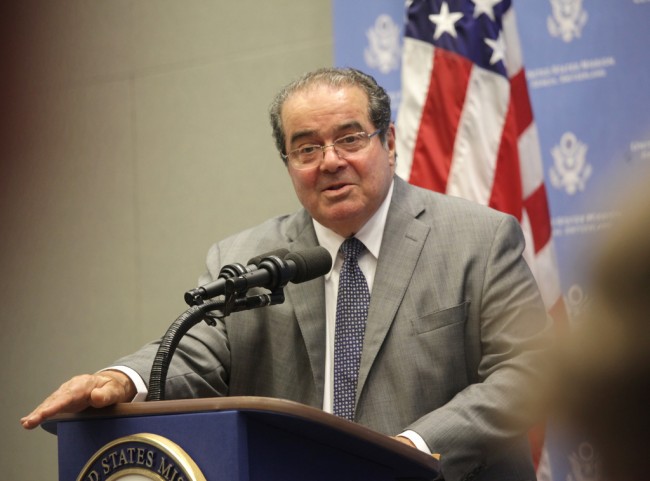 According to San Antonio Express-News, Associate Justice Antonin Scalia died on Feb. 13, 2016. The 79-year-old was in Shafter, Texas at Cibolo Creek Ranch. His body discovered in his room after he did not show up for breakfast. The announcement was made by Texas Governor Greg Abbott, who described Scalia as a patriot, a judge who was steadfast in his defense of the U.S. Constitution, and a Godly man. Scalia had been a supreme courts justice since his nomination by President Ronald Reagan and the unanimous vote by the Senate on Sept. 17, 1986.

According to 2016 Election Central, the news of Scalia’s death will have an unequivocal impact on the upcoming presidential election. The staunchly conservative judge will likely be replaced by whoever is elected to be the next U.S. president.

It is likely the Republican candidates will add the topic about nominating a new judge as a speaking point in the upcoming debates. Abbott told reporters, “We pray that his successor on the Supreme Court will take his place as a champion [of] the written Constitution and the rule of law.”

Abbott told reporters, “We pray that his successor on the Supreme Court will take his place as a champion [of] the written Constitution and the rule of law.”

Condolences have been expressed by Abbott, President Barack Obama, President George W. Bush, Chief Justice John G. Roberts, and others. Scalia is survived by his wife, Maureen and nine children.

UPDATE: Feb. 13, 2015, at 9:30 p.m. EST. According to NBC News, Obama applauded Scalia stating he was an influential  judge who likely assisted in shaping the minds and legal decisions of many judges, lawyers, and students. Obama also stated, “Today is a time to remember Scalia’s legacy.” He further added he intends to nominate the justice’s successor.

However, the Senate Judiciary Committee chair, Senator Chuck Grassley(R) and Senate Majority Leader Mitch McConnell (R) do not agree Obama should be the president to make the nomination. Those in the GOP believe the decision should wait for the next president. Grassley stated that during the past 80 years a nominee was not confirmed during a presidential election year. He was extremely adamant that Obama should not make any nomination.

USA Today posted a tweet from Minority Leader Senator Harry Reid (D), “The president can and should send the Senate a nominee right away.” He further stated it is the Senate’s responsibility to complete the task of filling the vacancy as soon as they are capable of doing so. Reid believes it would be unconscionable to delay the nomination until 2017.