While Los Angeles is not necessarily known for its hiking trails, the climate, weather, diverse geography, and eclectic wildfire certainly lend themselves to outdoor enthusiasts. Local residents and visitors alike can enjoy these excursions. They will give those who venture out to explore them a sense of the region and local geography while providing them with beautiful aesthetics to delight the mind, as well as exercise and nourish the body. That being said, here are some of the best hiking spots in Los Angeles and the surrounding areas.

1. Sandstone Peak–The Mishe Mokwa Trail to Sandstone Peak and Tri-Peaks is a Must-See for hikers in Los Angeles and the Southern California region. The trail ascends to the highest peak in the Santa Monica Mountains. It enables hikers to explore multiple landscapes with peaks, canyons, and rock climbing routes. The aesthetics provided by the Santa Monica Bay and the Pacific Ocean make this trail a wonder to behold.

2. Malibu Creek State Park–Another hiking destination in the Los Angeles area. It is situated in the Santa Monica Mountains. This location is well-known for its lakes, rivers, streams, and rustic California geology. Moreover, it is a great find for rock climbers and ranching enthusiasts. Furthermore, it serves as a prolific location for the movie industry.

3. Solstice Canyon–This popular hiking trail is also found in the Santa Monica Mountains. The well-shaded canyon holds the distinction of housing the oldest living tree and standing stone structure in Malibu. Its lovely aesthetics include a 1950s mansion and small, tiered waterfall. If someone enjoys a history lesson along with their daily exercise, this spot is designed for them.

4. Echo Mountain–This hiking spot is also a must for history buffs in the Los Angeles area. It is situated in the Angeles National Forest above Altadena, in Los Angeles County, California. It was erected after the Civil War as a sprawling resort and observatory complex in the San Gabriel Mountains. Echo Mountain can be accessed from the Old Red Car Train that travels from Downtown Los Angeles, by the Sam Merrill Trail (which is located at the top of Lake Avenue), or via the fire road which extends from Millard Canyon.

5. Santa Anita Canyon–Many consider this location one of the most picturesque in Southern California. This hiking locale offers a tranquil route for exercise, along with two waterfalls including the 50-foot Sturtevant Falls. The falls are a tourist hotspot and the canyon floors are covered in ivy. This area, which is also housed in the San Gabriel Mountains, is not only for hikers, but it also serves as a much-beloved camping destination.

6. Bridge to Nowhere—This 10-mile hiking spot will allow those who explore it to get their workout for the day. It follows the East Fork of the San Gabriel River deep into the San Gabriel Mountains. An enormous flood in 1938 demolished a roadway that was being constructed during the 1930s. However, the Bridge to Nowhere, a 120-foot concrete arch bridge, is the last vestige of the endeavor. The terrain is flat but the length of the trail is tiring unless someone is in shape and/or up to the task. 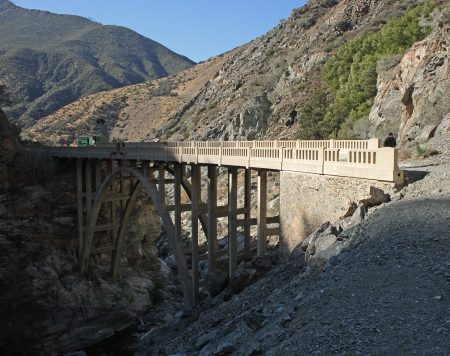 7. Runyon Canyon–This is one of the most accessible and popular hiking spots in Los Angeles. It offers several impressive amenities for a city park to boot. It boasts a paved path for beginners, an area for canines to play off-leash, a strenuous outer loop hiking area for exercise enthusiasts, and free yoga sessions are hosted by the Fuller Avenue entrance. Moreover, Runyon Canyon is known to attract celebrity hikers and offers a terrific view of the sunset. However, it is important to note that this hotspot has been closed for much-needed renovations. Therefore, those interested in exploring it should check for updates on closures and accessibility.

8. Griffith Park Trails–This is another city locale that has much to offer hikers, locals, and visitors. It is the 10th largest city park in the nation and one of the largest urban parks in North America, spanning nearly 4,500 acres. There are multiple trails of varying lengths and attractions to garner the interest of exercise seekers and tourists. For example, the Bronson Canyon Trail is a popular location for not only hikers but those in the entertainment industry. In fact, it has been featured in classic films, such as “The Searchers” (1956), “Invasion of the Body Snatchers” (1956), “Star Trek VI: The Undiscovered Country” (1991), and “Army of Darkness” (1992). Furthermore, this location is also best known as TV’s Batcave entrance from the 1960s “Batman” television series.

9. Will Rogers State Park–This hiking hotspot is about six miles roundtrip. The Santa Monica-based location is also a popular tourist destination since it was the private ranch of the iconic Western star. Its hiking trails include a detour for Inspiration Point, which offers stunning views and photo opportunities of the Pacific Ocean, Santa Monica Mountains, and Los Angeles Basin. This locale allows hikers and tourists to combine exercise and Hollywood nostalgia in one stop.

10. Topanga State Park–This hiker’s haven is nearly seven miles roundtrip and its steep inclines offer those who venture to this spot a real workout. With a summit of 1,300 feet, exercise enthusiasts will rejoice. Aside from the physical benefits, the aesthetics of this location are top-notch. Hikers and tourists alike can enjoy a great workout, picnic, and panoramic views all at the same time.

11. Vasquez Rocks–This destination is a 905-acre park located in Agua Dulce, which is close to Downtown Los Angeles. The locale offers stunning rock formations resulting from erosion and seismic activity. The famed Pacific Crest Trail, which stretches 2,663 miles from Canada to the Mexico border, passes through Vasquez Rocks. This hotspot offers numerous trails of varying difficulty, which provide many options for hikers and tourists alike to explore the park. This area is not only great for hikers of all levels but also for rock climbing enthusiasts. Moreover, Vasquez Rocks is also well-known for its use in the TV and film industry. TV shows, such as “The Twilight Zone” (1959-1964), “Bonanza” (1959-1973), “The Rifleman” (1958-1963), “Kung Fu” (1972-75) and “Mission: Impossible” (1966-1973), have filmed there. Furthermore, it has also been featured in films, such as “Blazing Saddles” (1974) and “Little Miss Sunshine” (2006).

Los Angeles might not be known for its hiking trails, but there is no denying that the climate, weather, diverse geography, and eclectic wildfire certainly are welcoming to outdoor enthusiasts. Visitors and local residents alike can enjoy the benefits–physically and aesthetically–of these locales. Hopefully, this article has provided readers with a real sense of the region and local geography while providing them with beautiful visuals to delight the mind and inspire them to explore these spots for themselves.