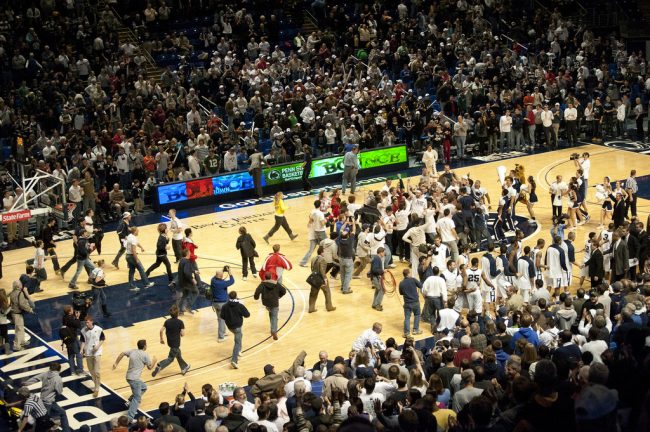 With just four minutes left in the first half, Ahrens height allowed him to jump above two other players vying for the rebound. However, as Ahrens attempted to get complete possession of the basketball, the Spartan forward landed awkwardly on his left ankle causing it to apparently break.

According to Sportsnaut (The Unfiltered Sports Juggernaut), players and coaches from both teams were in tears following the horrific injury to Ahrens left ankle. SB nation, an online sports news and information site reported that the Ahrens’ injury left everyone stunned as he was taken off the court in an air cast.

As the 6-5, 209 lbs forward was leaving the court, the crowd watched wondering aloud if the injury might be career ending. Then suddenly, before fully exiting the court, Ahrens pounded his chest as the crowd cheered him on.

It is quite fascinating to see the support shown to the Ahrens on social media. Specifically, Twitter instantly demonstrated its loyalty to the hardworking Spartan basketball player.

The Twitter profile of Kaitiereister seemed pleased when she wrote:

Kyle Ahrens comes back out to sit court side and Michigan State plays like all Big Ten fans know they can. If that doesn’t give you chills I don’t know what will.”

Good to see Kyle Ahrens… back on the bench with Michigan State teammates after suffering what appeared to be an awful ankle injury in the first half of the Big Ten tournament championship game.

Where can I get a Kyle Ahrens Jersey? The guy destroys his leg, gets stretchered off, returns on crutches to the bench to watch his teammates, and is practically falling out of the seat cheering every point. What a boss.

Great seeeing Kyle Ahrens back on the bench

Hate to see Kyle Ahrens go down like that… Loved seeing a standing ovation when he returned in crutches! Look for State to make a late push.

Michigan State’s Matt McQuaid hit his sixth 3-pointer of the game as the team began to make a late push trailing 46-44 with 10:21 left in the game.

I’ve watched Matt McQuaid and Kyle Ahrens’ friendship grow ever since living on their floor their freshman year. This is no coincidence that McQuaid is lighting it up after Ahrens’ injury. A special friendship between two special guys.

Though Kyle’s season has abruptly come to a close he, nevertheless, goes out this year as a winner. Not only did the Michigan State University Spartans win the championship game 65-60, Kyle and his team learned that his ankle X-rays revealed that he hand not broken his ankle. The 23-year-old MSU junior’s X-rays were negative. No break. In fact, some members of the team believe he suffered a severe sprain and could return for tournament play.