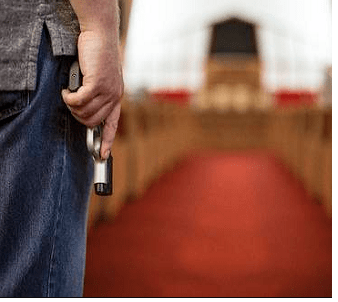 For many, it is difficult to believe that the words active shooter and church would ever need to appear in the same sentence. However, church shootings are quickly becoming constant in America. Many are concerned while, unfortunately, far too many others are in denial. The realization of increased shootings has many people wondering if it advocates for parishioners carrying guns in church.

A shooter at a church in White Settlement, Texas, was taken down by parishioners with guns seconds after he began firing Sunday. Those parishioners, who were also volunteer members of the church’s security team, can carry guns into church due to a law passed by Texas Gov. Greg Abbott in response to another deadly church shooting that took the lives of 26 people in 2017.

Places of worship used to insinuate solitude and peace, now it has somehow become a target for senseless shootings. Active shooters are a harsh reality of church life today and as such, it is important that pastors and other leaders recognize and understand the need for security. Simply being prayerful is not enough; churches must work to be prepared. In addition to law enforcement and a security team, congregants need to understand the importance of watching out for anything unusual.

Does this mean all parishioners should carry guns to church? Of course not. People often go to the extreme when something like this happens. Instantly they say the Second Amendment is their God-given right and therefore makes it appropriate to carry in church. However, without going through the proper channels, it also makes them a prime target if an outbreak occurs. During an active threat situation, neither police or qualifying security team members can identify why a person is shooting if they are not clearly marked.

Carrying guns in a church should be left to trained members of a security team who meet the necessary qualifications. Securing a house of worship involves all volunteers and staff. However, it is important that volunteers are trained effectively in order to balance identifying threats and remaining a healing center for the broken.

The importance of training is not new. Security professionals have repeatedly emphasized the need for it. Security teams should meet regularly to work through a variety of scenarios and revisit processes. These training sessions should periodically incorporate pastoral staff, greeters, and ushers since they are often the first to encounter a threat.

These are great opportunities to connect with local law enforcement to aid and/or facilitate training sessions. Bob Chauncey of the Church Security Institute said he has helped several churches in Virginia Beach create security plans but thinks more needs to be done. He believes to simply rely on the common phrase of trusting God is insufficient. Chauncey explained:

You can trust God, but when you left home this morning you locked the door, after exiting your car you locked it and when leaving the church after service you locked up. So, you are still trusting God, but also doing something about it.

Does this advocate for parishioners carrying in church? Yes, if they belong to the security team or have been brought in to help keep the organization secure. Wave Church in Virginia Beach has often taken advantage of the free training offered by their local police department. When speaking with Kim Thumel, the church’s security team leader, about the importance of making the church safe for worship, she said:

Our team’s role is to have a smile on our face but also be very visible to anybody who may have bad intentions. We need to understand that churches have become a soft target. The worst thing that you can do is walk around in that state of mind that it is never going to happen here.

Thumel, an NRA instructor who teaches a women’s concealed carry class, emphasizes the need for a written plan that includes an exit strategy. This can save lives in the event of an active shooter or other catastrophes. She added:

If you don’t think about it in advance, you can’t make a good decision at that moment. Instead, you just shut down.

The parishioners who responded quickly and effectively during the recent Texas church shooting were not just “attendees.” They were known members of a qualifying team. Texas Lt. Gov. Dan Patrick lauded the heroic actions of those volunteer security members. He said:

They were well trained, well trained. The heroism today is unparalleled. This team responded quickly and within six seconds the shooting was over. Two of the parishioners who are volunteers on the security force drew their weapons and took out the killer immediately saving untold number of lives.”

More than identifying threats and learning how to respond to violent situations, proper training also helps prevent opportunities for security teams to go overboard out of fear. Information and examples both teach staff and volunteers on how to discern situations and render the proper actions for potential situations.

In order to ward off potential attacks, places of worship can no longer dismiss the proactive effect of having security that is visible to both the congregation and potential attackers. Rather than only having security hidden or blended into the congregation, this visible deterrence can both protect and reassure worshipers. The obvious presence of security makes violators think again before they begin.

However, if a parishioner chooses to “exercise their right” and bring their weapon to church they should also prepare to “possibly” become the victim if they discharge that weapon in a crisis. Without proper training, good intentions can easily turn into a negative situation.