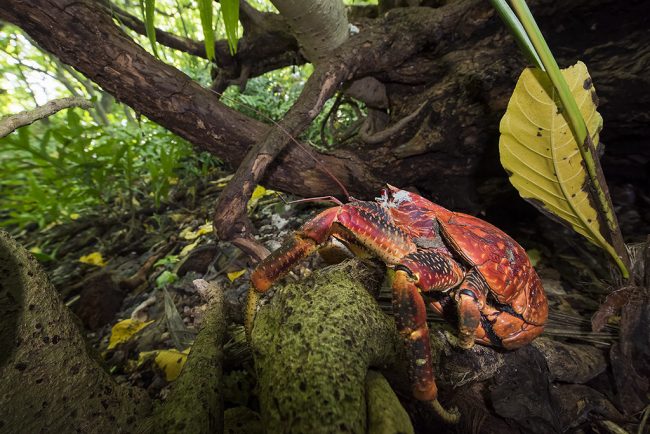 The world’s largest crab, the coconut crab Birgus latro, has made the news with Japan’s recent study. Researchers have been learning more interesting facts about this huge crustacean. They have discovered that the crab makes clicking noises to communicate everything, including mating.

The coconut crab became an internet sensation when a person posted a picture of one on a trash can. Due to the angle of the photograph, the crab looked much bigger than they actually grow.

The coconut crab weighs up to nine pounds and has a body length of 16 inches. This gives the anthropoid about a 3-foot leg span. It is rare for it to grow bigger than that, however not unheard of, especially when their body is supported by water more than them being on land. They can live around 30-60 years.

The body of the coconut crab is divided into sections. The front part has huge claws crabs use to open coconuts and the occasional bird. The claws are strong enough to lift about 64 pounds. Next, they have three pairs of chelates, these are hinged tweezer-like claws that are generally curved and sharply pointed. They use them for eating, defense, and courtship. The last pair of legs are inside the carapace (the hard upper shell), which also contains their breathing organs.

The crabs’ primary food source is made up of fruits and nuts, this said, they are not squeamish about eating tortoise hatchlings or even their own kind.

In previous studies, researchers found that the coconut crabs communicate by making tapping/clicking sounds, however, the cause of the sound or the reason why was not understood.

To further investigate this, scientists used an x-ray machine that captured movies of the clicking sounds. They used a digital audio recorder at the same time, this allowed them to play both at the same time. This gave scientists a more inside look of what was going on when these noises come from the crabs.

In the study, scientists observed both sexes, capturing the noises they made before, during, and after their mating rituals. What they found out is interesting. The communication noises were coming from thin appendages, known as scaphognathites, vibrating causing air to be drawn into the crabs’ lungs. When the vibrating happens, the scaphognathites flutter against hard plates inside the gill channels that generate the tapping sound, making coconut crabs the only land crustacean known to produce sound using this process. Crayfish Procambarus clarkil is the only other crustacean to be able to do this.

During to course of the study, researchers found that the sounds vary between length and they varied in terms of intervals. Researchers stress that they have not established the relationships between the actions and sounds. They plan on doing more research on coconut crabs to see if they can establish the exact reason why they make these sounds.