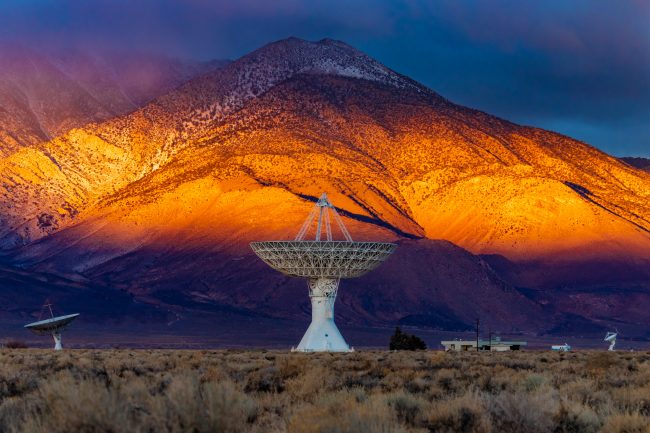 Astronomers have discovered new Fast Radio Bursts or FBR’s coming from outer space. For years now FBR’s have been recorded.

Recently, astronomers with the Canadian Hydrogen Intensity Mapping Experiment (CHIME) collaboration observed an FBR cycle for 409 days. CHIME is a radio telescope designed and built by several groups of Canadian scientists. They wanted a better way to study space phenomena.

During this time, the FRB 180916.J0158+65 followed a 16.35-day cycle. FBR’s last only a few milliseconds at a time. For four days the signal would spit out a burst or two every hour and then fall silent for 12 days before repeating itself all over again. They do not know what all the data quite means at this time, however, the material they have gathered has been uploaded to pre-print server arXiv, where it is awaiting scrutiny from other experts.

The first FRB (FRB 121102) was discovered by Duncan Lorimer and his student David Narkevic in 2007. They were looking through archival pulsar survey data that is commonly referred to as the Lorimer Burst. This burst was linked back to a small dwarf galaxy containing stars and metal. FRB 180916 was traced back to one of the spiral arms of the Milky Way-esque galaxy.

Researchers have considered the possible cause of the recent FRB. They have considered the orbital motion of a star or an object that may be acting as a companion in the outskirts of the galaxy. Authors of a different paper consulted with the researchers who discovered the pattern. They suggest the cause could be coming from a neutron star and early OB-type star binary system. A neutron star is the remnants of a supernova and is the smallest in the universe.

The diameters of a neutron star are the size of a city, for example, Chicago or Atlanta. Nonetheless, they are extremely dense, masses bigger than that of the Earth’s sun. The OB-type stars are massive stars that are short-lived. The combination of the interaction between the two, as well as the wind coming off of the OB-star, could be a factor in the cause of the repeating FRB pattern.

Researchers believe that further observations of this FRB could help them determine if other FRBs have similar patterns and behaviors or is this a new thing.