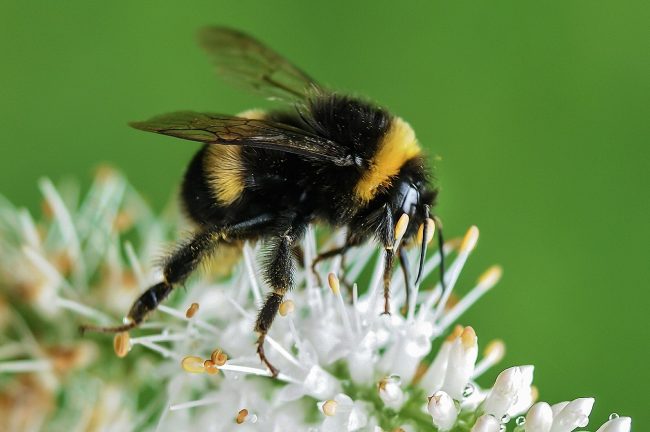 Researchers have found that pesticides affect the brains of growing bumblebees. To determine whether or not their theory was correct they set up experiments. Spiking nectar with a pesticide known as neonicotinoids, a substance they have commonly found on flowers in the wild. They set up a colony of bees in their lab and then introduced the fluid into the colony. To ensure a proper evaluation they had an additional colony in a different area, as the control group.

When the babies emerged as adults their ability to learn was tested for a period of three days. The same test was performed again when the bees reach the age of 12 days. Researchers then compared the results between the two data groups.

The information that they found was that the bees that were fed the spiked nectar as developing larvae significantly impaired their growing brains. To determine this fact, they tested to see if the bees could learn to associate a smell with food as a reward. The researchers kept score of how many times out of 10 a task was successfully performed.

Furthering the study, researchers used new micro-CT scanning technology to scan the brains of almost 100 bees that were involved in the spiked study. They found that exposure to pesticides shrunk the part of their brain known as the mushroom body. This part has been known to be involved in the bees’ (insects) learning abilities. Knowing that the mushroom body plays a key role in bees’ learning abilities, researchers feel that their findings support their theories.

Senior lecturer in the Imperial College London’s Department of Life Science, as well as the author of the study, Dr. Richard Gill told CNN,  “We are still trying to figure out what roles these factors play and how they interact. Pesticides are definitely contributing.”

Pesticides are being found inside more bee colonies making it a growing concern that more young bees could be affected. If that were to happen the life span of bees could end with extinction.

Dylan Smith, also with the Department of Life Science, made the comment, “Our study reveals the risks to individuals being reared in such an environment, and that a colony’s future workforce can be affected weeks after they are first exposed.” The fear is having an impaired learning ability could make it harder for worker bees to navigate or forage. That could be destructive to a growing bee colony.

3 Responses to "Bumblebees’ Brains Are Being Affected by Pesticides"